Fiasco, thy name is "Spider-Mobile"

I usually try to keep my "Bad Super Costume" posts about actual humanoids, but when something is so awesomely bad that even the guy who owns it calls it a fiasco, I cannot resist. Ladies and gentlemen, I present ... the Spider-Mobile! 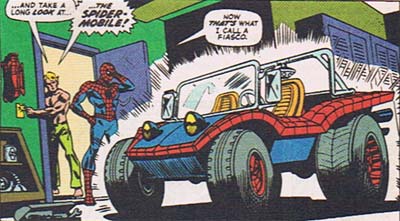 Besides looking silly, which, let's be honest, isn't saying much considering it's going to be driven by a guy dressed up like a blue and red spider, let's run down the many ways this idea sucks:

Seriously, I get that Marvel wanted to move some product in the toy stores, and they were insanely jealous of the Batmobile. But come on. Putting Spidey in a vehicle robs him of everything that makes him cool. He can't climb walls or spin webs or dodge and weave or in any other way act like a spider. Yes, the vehicle can do some of those things, but the vehicle isn't Spider-Man. Technology and doo-dads are part of Batman's persona, but not Spider-Man. Giving him a car is almost as bad an idea as taking away Superman's powers and making him lightning-based instead, although no one would be stupid enough to do something so obviously foolish! Oh, wait ...

To their credit, the writers at the time understood, I think, how silly the whole idea was. A company sponsored the build and wanted to pay Spider-Man to drive it, which he reluctantly agreed to eventually out of desperation and a desire to, you know, be able to afford pizza. It turned out poorly and he eventually dumped it in the river. Where a villain recovered it and reprogrammed it for evil.

Which couldn't have been that hard because, come on, the Spider-Mobile was pretty evil by the mere fact of its existence in the first place.

3 Responses to Fiasco, thy name is "Spider-Mobile"