The third rule of creating a super-powered character (only slightly less important than "Don't tug on Superman's cape" and "Never start a land war in Asia") is, "Never put anything in their name that sounds like 'rectum'."

Which brings us to She-Hulk villain "Captain Rectitude": 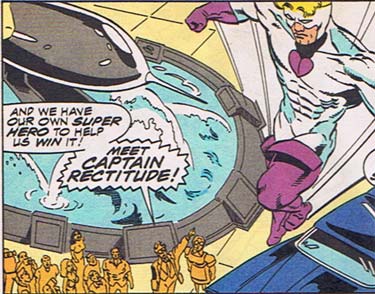 If you're going to violate that third rule anyway, however, at least don't put him in giant purple thigh-boots that should never be seen anywhere outside of a pirate deck. And you certainly shouldn't put a big double-testicle-shaped heart logo on his chest that fires pearly white beams of anti-smut rage. And you definitely, definitely shouldn't make his abilities based on re-channeling his every sexual impulse into Puritanical anti-porn powers.

Yes, that's right, "Captain Rectitude", with the name that starts out with the same root as "rectum", is entirely powered by repressed sexual energy.

Somewhere, Freud is rolling over in his grave and smiling.