If you were working for a major comic book company in the eighties and nineties, you were faced with a horrible dilemma -- no matter how many guns you gave your character, at some point there was a risk (however slight) they might get disarmed in some way. And let's face it, in those days a super-hero unable to shoot someone in the face was barely a super-hero at all.

Then, in a fit of pure genius that I am sure got someone promoted, Marvel came up with a brilliant plan: Put the gun inside the character! Thus was born "Bushwacker": 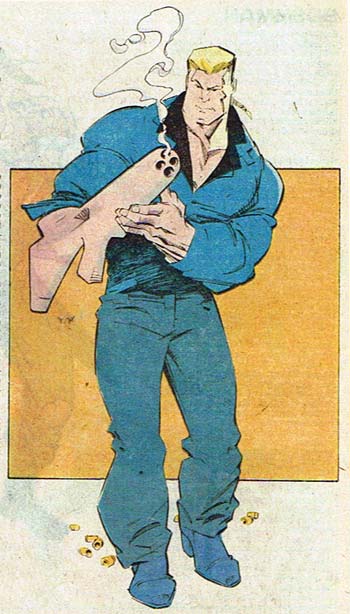 Yes, that pinkish-tan stuff is his skin and yes that is a bionic gun implanted in place of his arm. No, I am not making this up. In point of fact, not only is this an actual published character, but I submit to you that Bushwacker is the ultimate expression of the Image Principle, which I totally invented and which states:

No concept is too ridiculous if it increases the character's ability to shoot people.

Disturbingly, my first reaction on seeing this image was not "That's really stupid", but rather "How does he get the ammo in that thing, and where does it come out of". Which says a lot about how inured to bad super hero characters I've become. Of course I'm not the only one, as Wikipedia reveals others not only had the same question but came up with an answer:

He manages to load the weapons by swallowing ammo, such as bullets or flamethrower fuel.

I ask you, is that not one of the all-time great sentences in human literature?

Sadly, Wikipedia is silent on the subject of how the spent casings exit his body, although I suspect he spends a fortune on new toilets. In any event, I refuse to speculate on that subject because that kind of potty humor is beneath a blogger of my ethics and intellectual stature. (Seriously, if he farts is there a risk of a driveby? I'm just asking!)

3 Responses to Bushwacker: A whole new meaning for "Hand gun"