I am pretty sure I saw something like this in a Bugs Bunny / Daffy Duck cartoon: 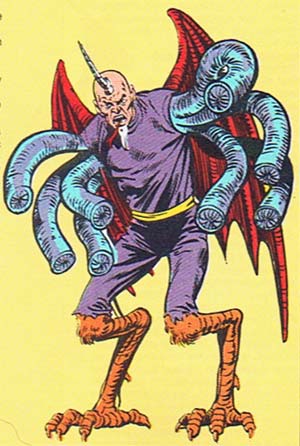 Apparently, though, this guy is "Chondu the Mystic", whose origin seems as mashed-up as his body. He's "The Mystic" because he dabbled in the arcane, but science transplanted his brain into one of the Defenders. Later of course (of course!) magic once again stepped in to re-transplant his brain into the body of a fawn (Dr. Strange is a right cold bastard sometimes), and it was only later that his former friends re-re-transplanted his brain into the current monster form. Whether that last was through science or magic is unclear, which is saying something given the insanity that has already been described.

In the high-falutin' world of art criticism (and stop me if this language gets too technical for you), this character design is what we would call "Bad". Generally you want to keep it simple, pick a theme and stick with it, but sometimes when you're on deadline and you're riding the Heroin Horse, you get a result like this.

More likely, someone created a "Comic Book Affirmative Action Committee" and they were given the task of putting together a character who could stand for the traditionally underrepresented parts of the animal kingdom. Thus:

I'm fairly disappointed that they kept humans as the Mammalian representative here; surely the powerful Bacterial Lobby could have done more to make their case.