The Kurse of a bad outfit

I love Walt Simonson, but he was smoking some serious rock when he came up with Kurse: 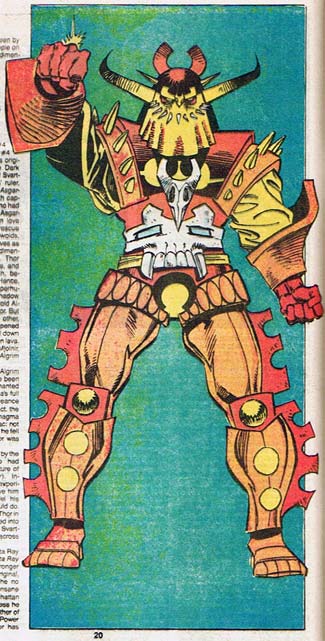 Moving from top to bottom, what the heck is a magnet doing sticking up out of his head? I thought maybe they were curved horns, but does anyone -- even an Asgardian god-type bad guy -- need three sets of horns jutting out of his noggin?

Maybe, if he's constantly getting picked on by the other gods for wearing a veil.

I mean honestly, what self-respecting immortal embodiment of bad-assery tricks himself out in bridal wear? I keep thinking I should look for something old, something new, and something borrowed, but if he thinks those pale blue skull-eyes on his abs count as something blue, he's one misguided cross-dresser.

Moving on, I never want to make a bad guy feel he shouldn't wear skulls. Bonery has a long and honored tradition in the super villain world, and goodness knows I honor our great fashion forefathers like the Red Skull. But Kurse, baby, don't you think two skulls are a little much? Especially when one of them is apparently from a reindeer?

Sort of the whole point of wearing the bones of your fallen foes is to strike fear in the hearts of your other enemies, to brag of your battle prowess. But who exactly is supposed to be impressed that you killed an antelope?

And don't get me started on why the second set of skull appears to be munching on his groin. I don't even want to know. Maybe he and Prince Chaos go to the same designer? There must be something about having super powers that makes you want to have a tiny little man staring out from your crotch.

I've never been a big fan of characters having random bits jutting out of their outfits as we see on Kurse's legs here. I think Walt Simonson is one of the all-time greats, but the only guy who could routinely pull off this sort of fluff was Jack Kirby. Here, it just looks like he raided an Amish warehouse of stocks.

Kurse is supposed to be awesomely powerful, going toe-to-toe with the likes of Thor (and the Power Pack kids!), so I understand the impulse to include all kinds of scary bits on his outfit, but it all just comes off as too much. Sometimes less is more.

One Response to The Kurse of a bad outfit