Hello, is Batman in there somewhere?

Try to guess what I hate the most about this Batman costume redesign from the pages of "Chain Gang War": 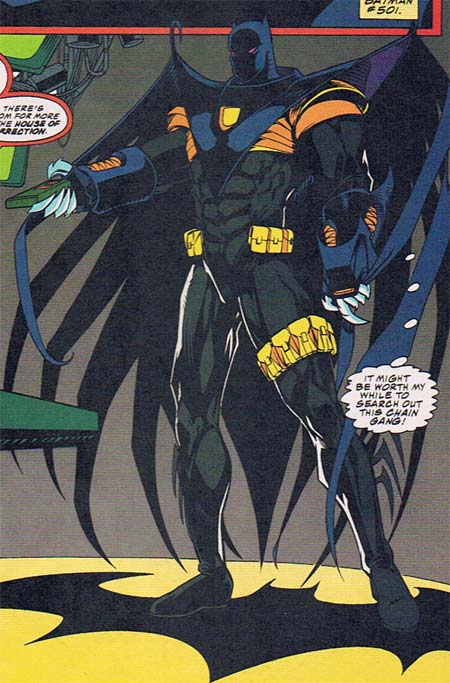 Notice anything missing? How about the most recognizable super-hero logo on the planet. Imagine an iPod with no little apple on it, or a Nike sneaker without the swoosh. What's the point of investing all that time and energy into making your brand instantly recognizable, only to leave it off the product? I know the temptation to tweak legendary characters is powerful, but this effort really blows it.

Besides the lack of a logo, the entire assemblage betrays the essence of Batman. He's supposed to be about speed, agility, stealth, and lethal force delivered with precision, but this costume comes off as bulky and ponderous. From the rigid, hook-tipped wings with long flowing streamers, to the massive gloves and metal fingers (metal freaking fingers?!), this outfit looks like the worst parts of an Iron Man and Spawn love-child. There's very little "Batman" in it, which may be why he's reduced to standing on a giant Bat logo to remind himself of who the heck he's supposed to be.

And just why the heck is Bruce Wayne getting all dressed up to watch TV anyway? You'd think he'd be comfortable enough to take off his mask and kick up his feet in the Batcave, but apparently not. I bet he goes through a lot of remotes, too, as those metallic fingers punch right through the plastic buttons. I also wonder if he required the leg pouches to offset his utility belt's lack of a cinch, buckle, or any other method for actually hooking together. At least he was able to get it in the extra-thick 'Image' size.

I could go on and on about the yellow banded armor under the thick cape front, or the strange blank yellow hole on the chest piece, or the silly fringe on the boots, or the bizarre energy blasters on the gauntlet, or the lack of a mouth-hole in the mask, or the tiny "Catman" style ears, but suffice it to say, I hate this redesign.

17 Responses to Hello, is Batman in there somewhere?