With the HeroMachine 2.5 Expansion nearing completion, I am starting to think about the next big project I should work on. After a bit of back and forth, the one that has me most excited is the idea of a Face Maker, a HeroMachine-powered applet that would focus on the face and head. One site that does something similar is "Ultimate Flash Face", to give you an idea of what I am talking about here. I've got a rough draft wire frame model and some other thoughts after the jump. 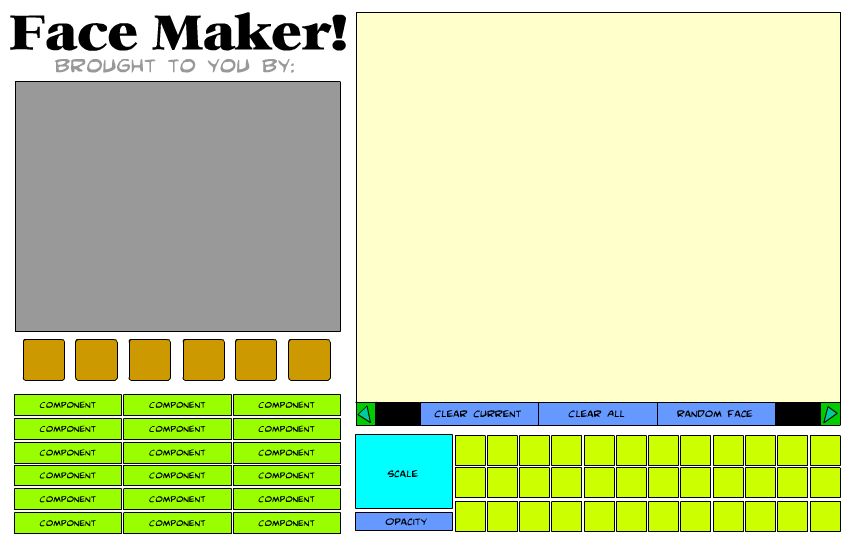 A few things to note at this early stage:

I was impressed with the level of specificity you could get with the Ultimate Flash Face; try out the "load" feature there and you'll see some really impressive examples of people who have made their own faces. I'd like for this to be even more capable, so you could get a nice looking, reasonably accurate portrait of real people done in a comics style, in full color.

Here is the list of components I am considering at this point:

I'm not sure about the Shirt, Neck, and Background components. To leave them out would make it strictly a face-maker, but including them lets you build something you could use as an avatar on other forums, chat groups, etc., or just something that looks more like someone took a picture rather than a police sketch.

I'd love to hear what you think about the interface, the overall concept, the components, or anything else you'd like to comment on. Is this something you'd use? Does it seem like it'd be fun to play with? Do you see any obvious pitfalls that I should avoid? Features you would want added?