Posted on April 17, 2008 by AFDStudios | Comments Off on Pinup Edition is now live! 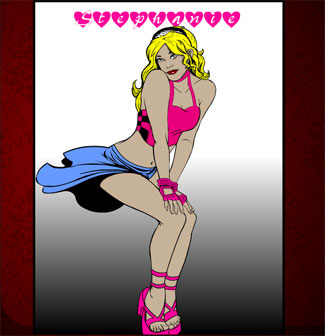 designed to be a tribute to the pinup calendars of the fifties, and features two attractive female figures you can dress up in a variety of fun outfits. This is very much a PG-13 style applet, a bit racy for younger users but nothing more risque than you'd see on the cover of FHM or in your average late-night TV show.

I hope you enjoy this latest release, and by all means please let me know how you like it, any changes, additions, or deletions to the item set you'd like to see, and anything else about it that crosses your mind. I realize this is a bit more mature than anything else I've done, but I think it's tasteful enough not to be too much for the younger crowd while still being suitable for an older audience.

On a more technical note, this is also a chance to preview two items that may impact future HeroMachine offerings. First, it has an integrated ad unit, something you're likely to see in the near future on HeroMachine 2.5. Let me know what you think about how it's implemented.

Second, I got to try out having an entire component dedicated to the "Name". Before, the name was either completely separate from the image, or was only in the basic system font on a white background. Now you can change the font and color to get a neat graphical element into the text. It's something I've been thinking about incorporating into future mini-Editions and maybe 3.0, only even more so. I'd be curious to hear how you feel it's working out so far.

This entry was posted in News & Updates. Bookmark the permalink.