As I've browsed through the archives looking for bad super-hero costumes, I've come across a number of characters previously unknown to me whom I had accidentally duplicated in my role-playing past. It's a bit jarring when it happens -- you're flipping through a comic and all of a sudden someone appears who you thought you'd invented ten years back. Only instead of a man it's a woman, and instead of being a villain it's a criminal, and their costume is just all wrong.

I thought I'd share a few of those, and going forward I might take a crack at re-imagining other established characters, sort of a HeroMachine "OtherWorlds" experiment. Here's the first accidental homage. 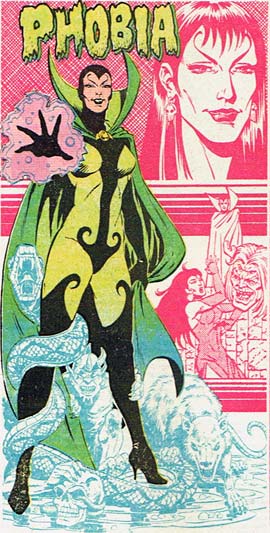 This Phobia is from DC's "Teen Titans", and is a member of "The Brotherhood of Evil". She uses her psychic powers to discover what the target fears the most, and then manifests those fears in their minds with life-like illusions, causing them to be consumed with terror. Her costume reminds me of a Walt Simonson style design, reminiscent of Asgardian garb, particularly that of Hel. A pretty cool character and design.

Back in the early nineties, I also created a character named Phobia, having never known about the DC version. My phobia was a gang leader, with similar powers -- the ability to paralyze a foe with terror, or to simply cause a general feeling of fear that lessened their combat abilities. He was both an egoist and a martial artist, and wasn't so much evil as hardened by circumstance. In the campaign I created, he was a member of Predator, a vast criminal gang that was trying to take over the US underworld. Here's what he looked like: 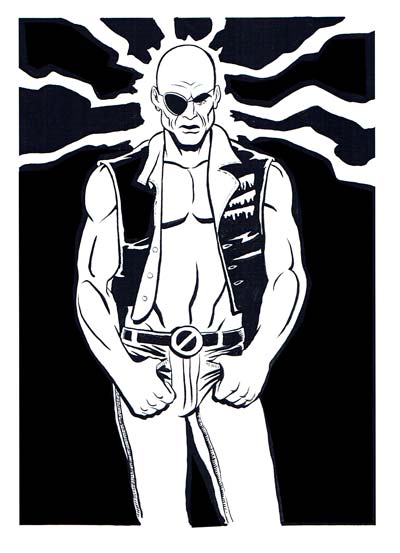 Same name, same power concept, very different characters. If I'd known about the other Phobia, I don't think I'd have created mine, but such is life.

This entry was posted in Remixes, Super-Hero Stuff. Bookmark the permalink.

One Response to Remix 1: Phobia