Posted on February 29, 2008 by AFDStudios | Comments Off on Fruntsh!

Just like a drummer can create a wide range of sounds by hitting different varieties of the same instrument with a stick, super-heroes can do the same by pounding on different parts of an enemy's body with varying limbs. For instance, if you snap a demon's spine with your hand, you get “Fwak-tchh”, but doing it with your foot gives you "Fruntsh": 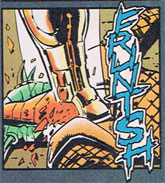 Making beautiful music like this isn't as simple as it seems from the outside; you've got to know the acoustic properties of a whole slew of enemies' body parts, and how they interact with your own arsenal of weapons. I'm pretty sure the characters in "Battle Tide II" (Deathstrike Headsmasher and Crushnuts Bootiewhooper, or something like that) had to take, like, at least a semester of music appreciation before they were allowed into Battle, much less Battle II.