Not that there's anything wrong with that

Somehow I missed it, but in the mid-80's DC cleverly slipped a Gay Pride March into the background of one of their "Who's Who" books, and I think it's great: 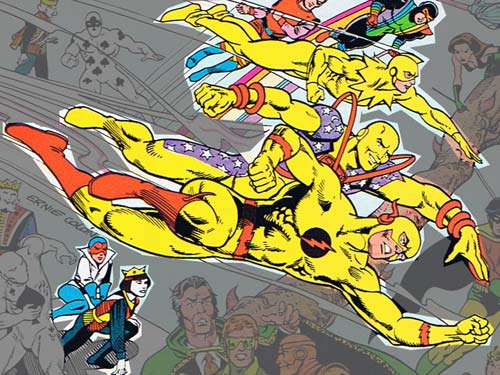 I've grayed out the background characters so you can focus in on the brave warriors leading the charge for a comics-wide acceptance of their sexuality. From the very proud "Rainbow Raider" (need I say more about that name?), to the see-through red silk sleeves and striped stockings of "Red Bee", to the flowery jester-like cowl and low-slung floppy boots of "The Ray", and finally to the man-on-man flight of love of "Reactron" and "Reverse Flash", these fabulous men in spandex are finally willing to let it all hang out. It's long past time gay supers had the freedom to come out of the secret closet and fly proud. I salute you, one and all!

The only question I have regards what's going on down in the lower left. That's "Queen" from "The Royal Flush Gang" there in the front position. At first I assumed the character behind her (clearly getting into amorous position) was another female hero, to carry on the gay pride them by including lesbian members. But actually that's "Quicksilver", a male character. Apparently he got the memo that this was a Gay Pride event, and tried to dress like a girl in hopes of getting some time with "The Queen". I give him points for ingenuity, but he's got no chance, as clearly she's staring lustily at "Queen Bee" (not shown) on the other side of the cover. After all, no queen worth her salt would waste time with a commoner, especially considering he's straight and has a reputation for being "extremely speedy", if you know what I mean.

Professional pride prevents me from commenting on the fact that the artist's last name is "Colon". But come on, that's awesome.

8 Responses to Not that there's anything wrong with that