When you're building a super-hero costume, it's very tempting to include bits and pieces just because they look cool, and not because they make any sense. Take, for instance, this outfit for Doctor Polaris from "Green Lantern #59": 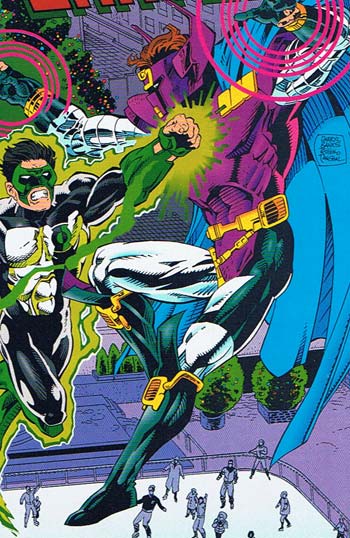 If your secret identity is as a carpet installer, you probably shouldn't incorporate your knee protectors into your costume. I'm just sayin'.

I also have to say a word about Green Lantern's pseudo-metallic gloves. What kind of metal is hard and shiny while still being able to stretch to accommodate the bending of a wrist? It's been a while since my college geology course, but I'm pretty sure metal isn't what you would call "stretchy". I used to think maybe GL's gloves (and mask and boots) were just poorly rendered, and weren't actually metal. But no, in this issue he deflects a quarrel with one, resulting in a "splang".

Yes, I know, it's super-hero stuff, it doesn't have to make sense. But every single time I see that particular GL uniform, I get brought up short, my brain wondering how in the heck those gloves actually work, and why that metal band connects the forearm piece with the hand piece. And where his nose goes under that mask. And why you would have all that metal protecting the front of your face instead of the back of your head where all of the, you know, valuable squishy bits of brain are. But then again, this particular GL was a comic book artist, so maybe he thought his eyes were more vital than his brains?

Then again, given the high-kneed design of GL's boots, maybe he and Doctor Polaris are going to give up the super-powered game and open a carpet-laying business together, secure in the knowledge that at least they won't have to deal with any OSHA violations for lack of protective knee-wear.