Posted on January 3, 2008 by AFDStudios | Comments Off on Custom Hangman

Pre-fab is good, but custom is better. At least, that's what my home builder told me just before handing me his bill, but it's just as true for super-heroes as it is for houses. As another example, from the pages of "Roll Call 06" by Oforie Murray, I give you Steven Warfield's "The Hangman". Steven's initial proposal had this HeroMachine illustration: 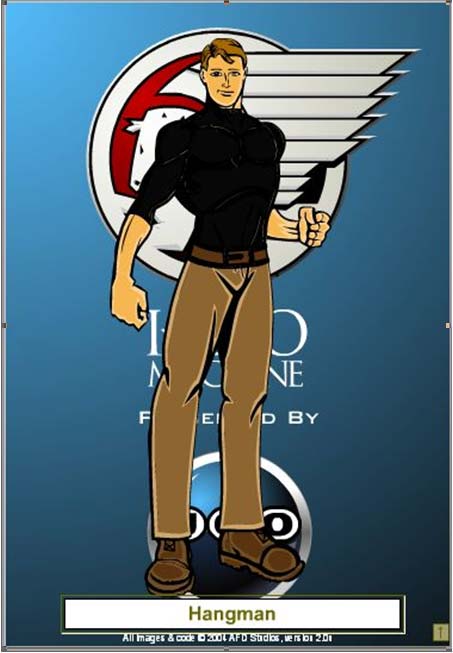 When you're doing a custom illustration for someone, the more detail you can get, the better, and Steven certainly came through. Here are the initial artist's notes he sent in:

Artists Notes: So this is obviously a pretty generic bit of art (the piece I did up at HeroMachine), but I think that it gets across the idea of how I think that Hangman would look "in character." As per his description, he wears the upper part of the bodysuit under any normal clothing (and would wear long sleeve shirts to accomplish that).
I am thinking maybe the smarmy overconfidence that Edward Norton displayed toward the end of Primal Fear for how he would look in the face (I would include a picture of what I am talking about, but as of yet cannot find any). I also think that it might be a good idea to have a "plainclothes" version of him in the foreground, with the elongated, masked version in the background/behind him rising up (to give an idea of how he gets away with his "dual existence" to some extent). If that is not possible, perhaps an "action shot" of him sloughing off his regular clothes and elongating out might be cool. As for his clothing - I am thinking some sort of body-suit that can stretch with him (to a degree). His hands would remain ungloved (so that he can feel what he is doing, both in terms of being more capable and also the thrill he gets from it). As for the mask, I think that a more elongated version of the one I have attached would be damn near perfect - and would give a chance to see the side that he doesn't display when he is hunting to really come through (since you can still see his eyes and mouth).

After a few initial tries, eventually that first generic HeroMachine image turned into this: 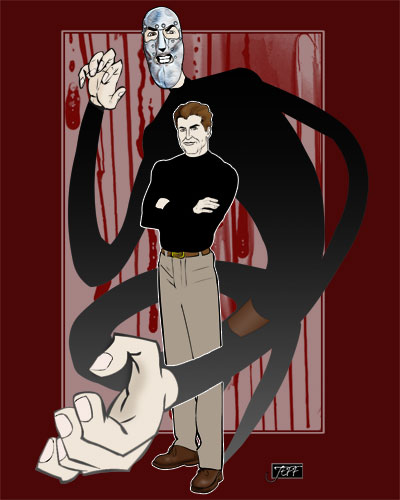 Next week I'll be announcing a special contest that will let you -- yes, you there, in your pajamas! -- try to get a custom illustration like this for your very own character, so be sure to check back then!