Bad super-hero costuming isn't limited just to complete outfits. It's entirely possible to have a pretty decent uniform that contains one or more ridiculous components, as I think this panel featuring Marvel bad guy "Blackout" can attest: 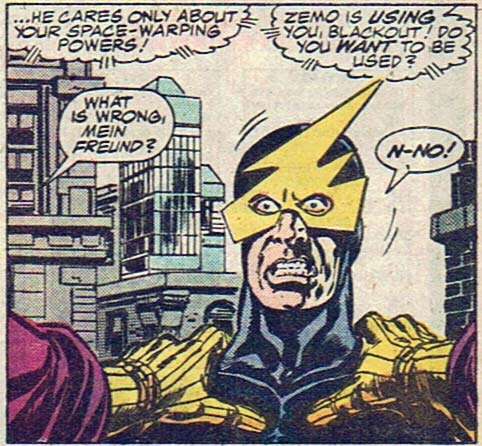 Apparently Blackout goes to the same haberdasher as "Electro". A steep discount in off-the-rack super-villain accouterments is the only explanation I can come up with for this mask/headdress; I imagine the conversation went like this:

Electro: Dammit, I told you I only wanted FIVE lightning bolts on this mask, not SIX!
Haberdasher: Right away, sir, my apologies. snip snip There, all better!
(Several weeks later, Blackout walks into the shop.)
Blackout: Haberdasher, I need a mask! Something with lightning!
Haberdasher: Certainly, I'd be happy to make one up for you, only $1,000.
Blackout: Crap, I only have fifty on me.
Haberdasher, thinking: Hm, I can give you a one-bolt mask out of a remainder for that.
Blackout: Sold!

I bet that thing gets caught on the top of the car door frame every single time. On the plus side, if his electrical powers should ever fail him, he can always lower his head and charge like Rhino, so there's that.