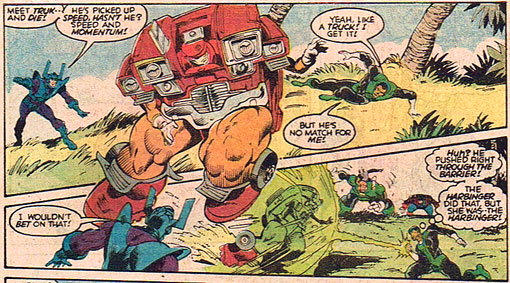 I find myself rendered almost speechless by how incredibly lame this character is. If bad were a scale that went to ten, "Truk" would be an eleven. At first I assumed this incident resulted from some sort of Marvel-led takeover of the DC offices in an effort to drive them out of business. Or perhaps it was a bad April Fool's joke.

But no. This is an actual, bona-fide, yes-they-really-meant-to-do-it super-villain. And thus I am legally required to unleash the mockery.

At the risk of being stricken down by the Gods of Understatement, this is a bad costume. From the mirrors hanging out of the oversized "hood" above his head to the half-wheels on his grotesquely out-of-proportion legs, nothing about this outfit makes any sense. I think this angle gives you an even better idea of just how thoroughly Truk's tailor has screwed him over here: 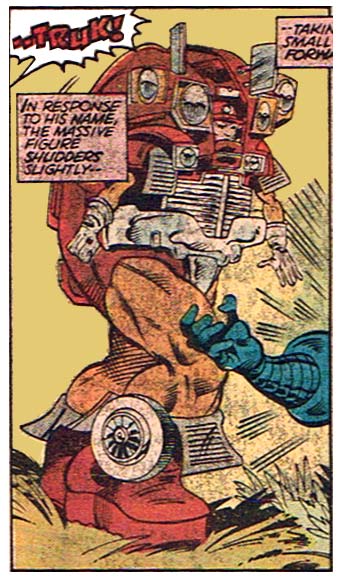 Look at that drawing and tell me how in the heck this guy is supposed to rotate at the waist. Or see anything except what's directly in front of him. Or use the two side mirrors mounted above his head, not to mention the rear-view mirror which, I assume, offers a spectacular panorama of the inside of his helmet. Cab. Whatever.

I bet he's got relatives back home just itching to get into the game, too. There's "Sub-Compact", his pint-sized cousin who's as energy-thrifty as he is ineffective. And "Vann", the overweight and out of date mother who prowls the local soccer fields for prey. Just hope he doesn't call in "HummR", his enormous, bloated, begrilled brother, built to roam in the unchartered wilderness but who, alas, is doomed to forever prowl the streets of suburbia for fear of getting mud on his flaps.

I've seen some bad costumes in the course of seeking inspiration for HeroMachine elements, but this one is definitely among the worst.