Reply To: Web Comics by CD

It’s taken me a couple of months, but I finally got the cover done. 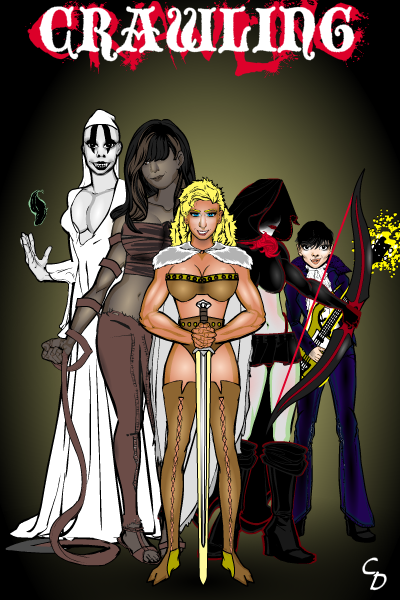 As promised, here’s the formal introduction:

Nimu – exiled Northlander by her sister, Queen Galinda because of a prophecy that declared Nimu would be the inheritor of the Golden Power. She is the greatest fighter of her people, possibly all Sumina, and as strong as a Necran. She is only beginning to experience the Golden Power coursing through her which giver her some healing abilities. Strong leader but limited experience her new power.

Devla – from the Necra tribe, far southwest of the Highlands. The Necrans are taller and stronger than the Northlanders as a rule and known to communicate with the dead. In fact, they are known for their Dance of the Dead ceremony where they supposedly gain great magical power from the nether world. Devla, the Necrans most powerful warrior-mage, has been both an ally and enemy to Nimu depending on what suits her purpose. Only joined the group because the dead are restless, and she trusts no one. She has some respect for Nimu.

Sorrell – aka Crimson Raider, a mixed race of Northlanders, Necrans, and Elves (who no longer exist) and live in the Twilight Copse. They are usually referred to as half-elves. Sorrell is a skilled archer and thief. Mysterious, keeps to herself, doesn’t say much, but is quick to anger.

Apiyo – from an ancient warrior tribe in Central Africa who train their entire lives. She is the first to pass the fire trials in 500 years which allows passage to Sumina. Apiyo fights with a “swinging spear”. Her ancestor was the last to cross over and fought with Neela, an ancestor of Nimu’s. Wise beyond her years, extremely tough and quick.

Qi Sun – a musical prodigy from Japan whose music is magical. She accidentally created a portal to Sumina and has been trapped there since. The youngest and amazed by everything.