Lets ee if I can do this

I JUST came up with this guy and really like him.
Thanks for this contest, I probably would have NEVER made this guy 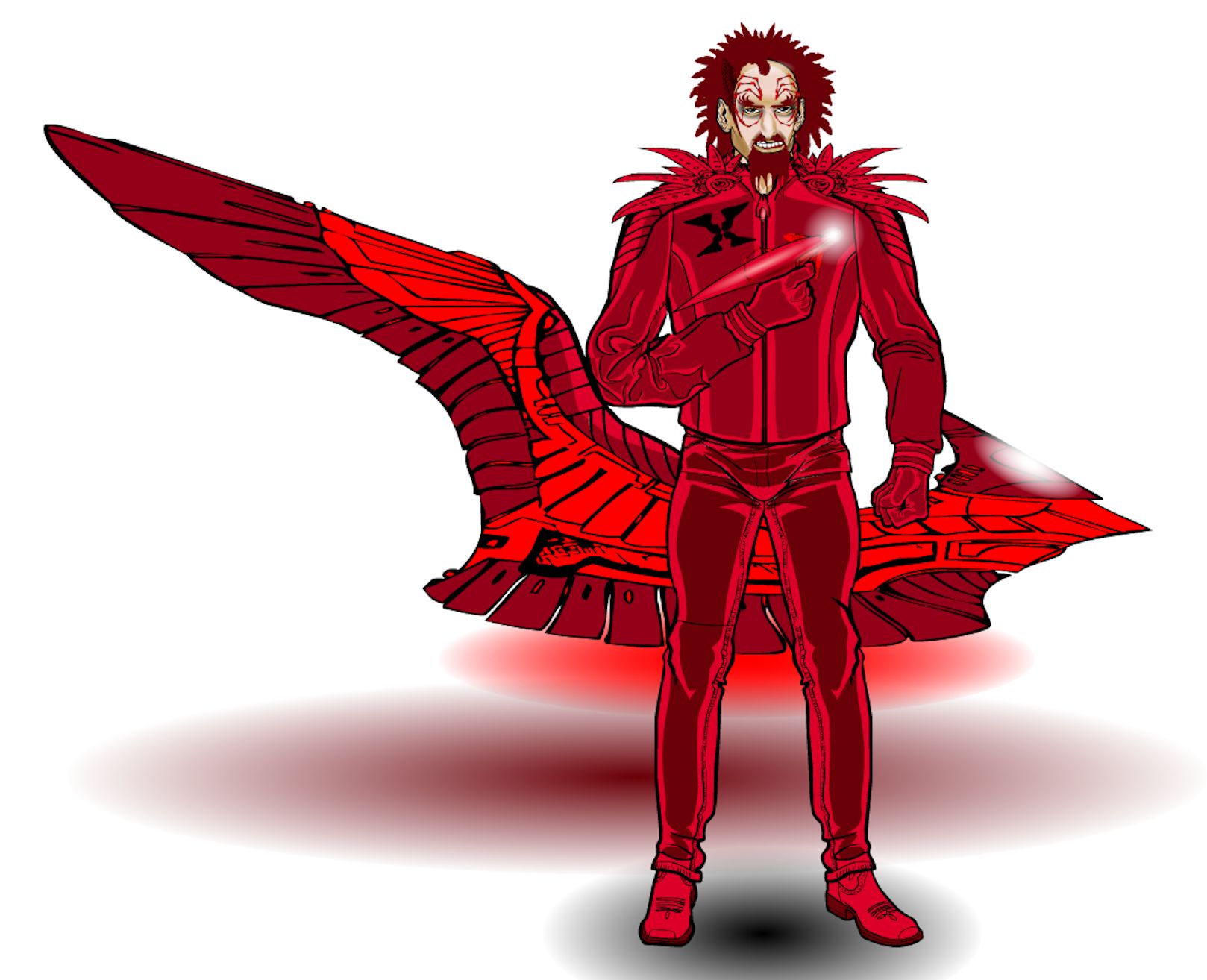 Once upon a time Rajas, Aurora and Xennon Lazarev was a happy family.
Rajas wanted to be a writer since mem-school, jacking into writing classes and workshops. He wrote articles, short stories, and finally a book. The book did well, real well, getting great reviews and fantastic sales it became a number 1 best seller on the charts almost overnight. Rajas suddenly was spending more actual time with his Editor at lunches and meeting. Rajas had an entourage consisting of a manager, an accountant, a lawyer, publicist, an image consultant, a personal trainer, masseuse, dietician, chef, hair stylist, make-up, manicurist, fashion designers, personal shopper, photographer and chauffer.
The sudden success was not only money but parties, book appearances
and signings, interviews all over the web and holo-vision, conventions, panel discussions, awards. Almost everything he did and said was carefully choreographed, but he got to hobnob with other top authors, some of his own personal favorites, and he had attained his own star status.
He was under a lot of pressure to write another book and he wrote a
sequel and gained more and more buzz and popularity, his editor
couldn’t be more pleased. Without asking his wife or son, he bought them a mansion and moved them all into it. While they had more room and were living in opulence, Rajas was very rarely at home, or always shut in his office working on the next book.
Once again Rajas was under the gun to write another book, it stressed him out a bit, but we got it done and the next year he had third book in his trilogy, which had done well in advanced orders alone, outselling the first two books..
Not only was Rajas spending more time with his editor now but he was also the newest darling of the Publisher and CEO of the company.
Rajas enjoyed it for a while, but begin to panic, he didn’t have any ideas for a new book, and the more he worried about it, the more he seemed to have writer’s block, luckily six months after the publication of third book his first book was considered and accepted to become the first of a series of holo-movies.
Rajas was offered to turn it into a screenplay for the movie
making a significant and outrageous paycheck.
When the holo-movie came out, it was a blockbuster. Now he socialized with producers, directors, actors and actresses, composer, musicians, FX men, stuntmen, at company parties. There were flocks of paparazzi
newspapers, magazines, news, entertainment, talk show circuit, web and worldtube.
Of course there were wild parties full of music, drink, drugs, sex
Things were happening faster than Rajas could deal with. With the drink and drugs were some violent outbursts. The paparazzi paired him up with everyone from the hot younger actress to the male editor of the books. Rumors, innuendo and scandals real and imagined flew around Rajas like flies around rotting trash. This of course effected Rajas’ family life, always being away from his wife and son, all the stories of him sleeping with everyone who had contact with him. After a while he became addicted to the drug stardust which was popular with the celebrities and he became increasingly violent and abusive, getting into arguments with the editor when they pushed him abut a new book, or a director when his screenplay had to be tweaked,, trashing his hotel rooms, attacking the paparazzi and the like. He became increasingly short with his temper yet quick with his fists.
He was eventually convinced to go to a psychiatrist and worked on Anger Management, but that really didn’t work. So he went to rehab, but once he was out he was back socializing with celebrities and exposed the wild parties of sex, drinking, and stardust which Rajas started using again
He went to rehab a second time and when out started using Stardust yet again
When Rajas was home Aurora and Xenon were regularly abused either mentally or physically.
Young Xenon tried repeatedly to get his mother to report Rajas or to pack up and leave him, but she was too terrified to. One dark night after a Rajas
Stardust-driven rant, 14 yr old Xenon went out through his bedroom window and ran away.
Xenon lived on the streets, learning to survive and although hard, it was still better than living with his abusive father.
4 years later Xenon heard that his mother had been murdered and his father had disappeared either abducted or on the run, no one knew for
sure.
Xenon learned rajas was so far in debt he had been pawning or selling anything and everything he could to maintain his stardust habit including all the gifts of jewelry, clothes and shoes he had given Aurora over the last few years.. He even owed the utility companies who were threatening to turn them off. Xenon went on a hunt for Rajas, checking with his father’s suspected celebrity ‘friends’ and his later less than savory street contacts.
Xenon tracked Rajas down finding him doing some cheap unrefined version of stardust. Xenon confronted his father about killing Aurora, Rajas didn’t deny it, calling Aurora names, accusing her of always doubting him, trying to run his life and ruin his fun. Xenon told Rajas that he was going to take him in to the authorities where would stand trial, be jailed and then executed for Aurora’s brutal murder. Rajas fought back with incredible drug induced strength, numbed to pain and reason. Xenon took a beating before grabbing a pipe and beating Ragas with it … to death. The investigation ruled that Xenon had only acted in self-defense.
With the reward Xenon received for finding his father and solving Aurora’s murder Xenon, bought a Z54 Laser blaster and a Peloton Breakaway hovercycle from the Slipstream Corp and he became a bounty hunter.
Which he has bringing in people who should never be loose on the streets. for years now.