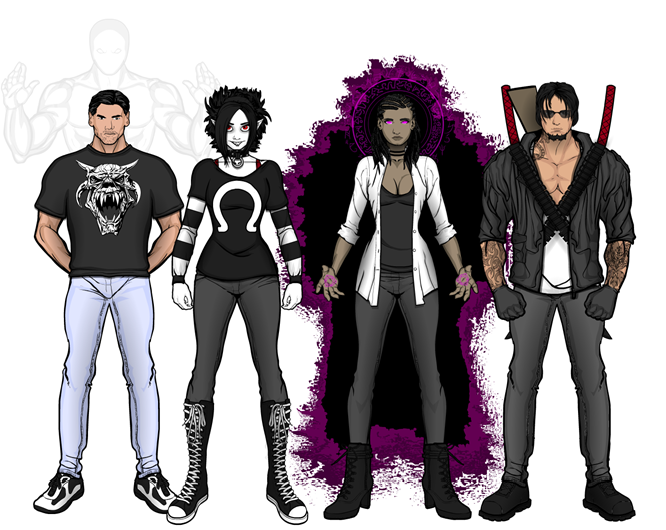 Ed McGarry & Ray Pryce
Codename: Ghost
Bio: Once two friends, their current predicament was caused by a spiritual summoning gone wrong, now leaving Ray’s soul bound to Ed’s body. The two still are two distinct and different people, however Ray is reliant upon Ed to interact with the world, even being unable to communicate with anyone but his friend. Ray can, however, leave Ed’s body for short periods of time and manifest himself as a etheral plasmic entity (more commonly refered to as a ghost). In this form, Ray still cannot interact with the world physically, but he cannot be seen or touched by anyone, making him ideal for information gathering, especially as any information he takes in is transmitted directly into Ed’s mind as well.

Erica Streich
Codename: Endling
Bio: A Night Spirit, Erica’s natural form is rather imp-like, with pointed ears, sharp jagged teeth and a pasty white complexion. However, as her species are trickster spirits, she is capable of many forms of mimicry, able to transform her physical appearance as well asbeing a perfect impersonator in both habits and speech. And of course, being a Night Spirit, she has limited magic, including short range teleportation and the ablitiy to randomly affect probability. Of course, she often uses these ablities to perform pranks, as is the way of her species, but such abilities are very useful in law enforcement. Found abandoned in a small village outside of Munich, Germany, she was raised by humans and as such is far more empathetic towards people than most of her kind.

Rebecca May
Codename: Karim
Bio: Daughter of SRC Supernatural Research Head, Richard May, Rebecca inherited much of her father’s intelligence and curiosity. She also gained the ability to commune with and tap into the powers of the extradimensional creature known as Karim whilst she and her father were researching on and experimenting with ancient texts and rituals. Karim is able to open portals to any unsealed (i.e. not magically protected) place on Earth by traversing different dimensions and the creature gives Rebecca the ability to comprehend a multitude of ancient and unknown languages and symbols.

Jonathon Archer
Codename: Wraith
Bio: Jonathon stands out amongst all other SRC operatives in that he has no powers or abilities what-so-ever. He is a normal human being and, as such, feels quite inadequate around his peers. Unfortunately, this has had quite the effect on him. Already a try-hard before joining the SRC, he has pushed himself even further in his pursuit to be the very best and just ends up coming off like a prat. He has skill, of that there is no doubt, he was a successful demon hunter before joining the SRC, just not the best. His entire motivation seems to be that he wants to be seen as cool. His life was fairly normal, he had a normal family in a normal town and went to a normal school, so he went off and started hunting demons because it was cool and edgy. He loves guns and swords and would like nothing more than to be a supernatural creature (he’s even tried to convince the SRC’s werewolf/ vampire contingient to infect him, which got quickly rebuked) because he hates normality. He also angsts over his every percieved problem and insisted on the codename Wraith above any other suggestion, an attitude that has seen him unofficially dubbed “Captain Edgelord” by some members of the team.