The cosmically empowered hero Solarion, an alien being of unimaginable power, fell in love with a human woman, an astrophysicist named Rachel Reynolds. She became pregnant with twins just before the outbreak of an interstellar conflict that called all Earth-based posthumans into the stars. During this sprawling adventure, Solarion sacrificed his life, detonating himself in order to wipe out the entirety of an invading empire’s armada. Rachel fell into a deep depression from which she never recovered so when the twins were born they were left more or less without parents. The remaining Honor Guard members helped raise them, and the Reynolds Twins became very close friends with their children. 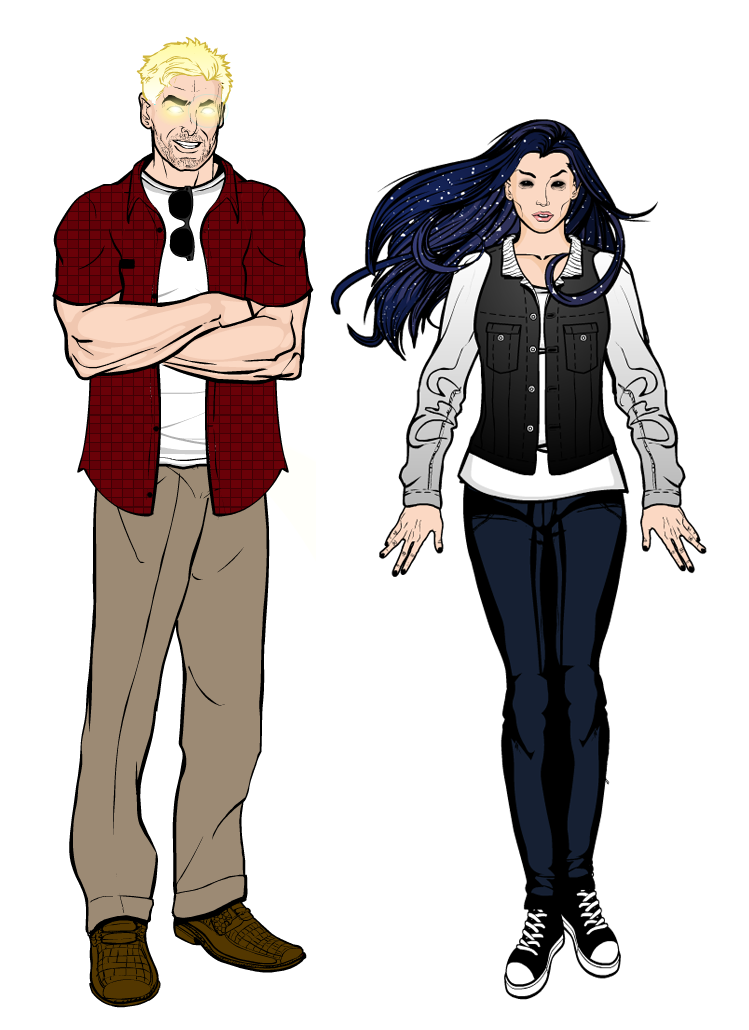 PROMINENCE – Andrew Reynolds (formerly the superhero Prominence) possesses solar-based abilities. He could absorb and store solar radiation, using it to increase his strength and durability or expend it outward in a devastating blast. He married his teammate Megumi Sato (akin to high school sweethearts) after an unexpected pregnancy. Despite the suddenness they were happy. Andrew and Megumi were married for several years, but right around Claire’s 3rd birthday Andrew’s unresolved issues around his childhood as well as the pressure of caring for his sister began to bubble to the surface. Despite his hybrid physiology, there was one substance that affected Andrew as effectively as ordinary human beings: alcohol. He began to use drinking as a coping mechanism for the pressure of parenting and superheroics. His relationship with Megumi deteriorated. At one point he came into conflict with her brother and sister, and in an uncontrolled burst of his abilities he nearly burned down their home. Claire was sleeping upstairs. Megumi swiftly filed for divorce and Andrew was prohibited from seeing his daughter. Many years hence and after much hard work, Andrew has been sober for a while, and has regained visitation rights for his daughter. He has an amiable relationship with Megumi and Theodore, though she remains incredibly wary of him.

SINGULARITY – Angela Reynolds (formerly the hero Singularity) possesses the ability to warp time and space, create supermassive gravitational focal points, and inherited a portion of her father’s cosmic awareness. Because her father was never able to train her in her abilities, many years of being attuned to the universe have left her in a state of tenuous mental health. In a minor clash with a C-List villain Angela lost control and nearly collapsed a populated apartment building. She was left in a catatonic state afterwards. Andrew cared for her until his own downward spiral and subsequent incarceration. After Andrew’s release and with some help from Theo, she has been slowly coming back to normal functionality, but prefers to be isolated.