Now, when entries first started coming in for this CDC, I thought it would be the normal fare for the poll, one person runs away with the prize. However, as more and more entries started to come in, I began to think "ok, this one is going to be close". And so it turned out to be. The five finalists where separated by 12 votes, that's 12 votes between places 1 and 5 (to put that in perspective, the previous weeks poll had 12 votes between positions 1 and 2). And if that wasn't enough positions 1 and 2 were separated by 1 vote. Yes, 1 vote. I sorta half wanted to give a vote to second place so we could have a tie, but the poll had closed by the time I got round to writing this and, anyway, that woulda been unfair on the winner, because he thoroughly deserved this win.  And that winner would be CantDraw for his Sci-Fi Angel. Congrats CD, that'd be your 3rd win I believe, please make sure you speak to dblade about your prize. And a hearty congratulations to everyone who entered, especially our finalists, the fact the poll was so close is testament to your creativity and talent. 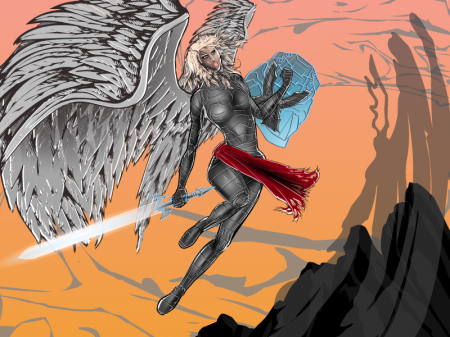