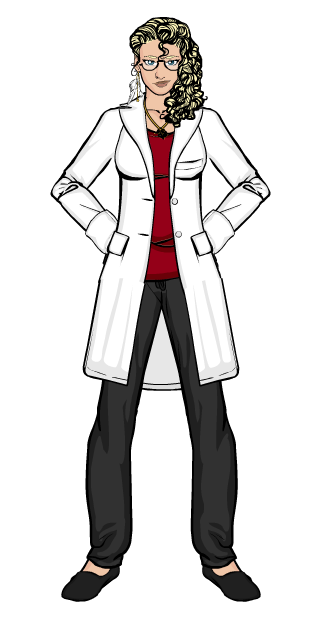 Once a well known and respected zoologist, Cassandra Combs (Cassie to her friends) was ostracized by the scientific community when she started espousing theories about cryptids and mythical creatures being real. What her former colleagues didn’t realise was that Cassie was right, she had actually stumbled across real-life monsters. Well, she’d fallen through a portal into a fae pocket dimension and got stuck there for a few weeks, but it’s close enough, especially when you’re having to spend a week with a cù-sìth. Either way, she dedicated her life to studying these new discoveries, hitherto ignored by science, and immersed herself into the world of paranormal research. It was during this time that she met and became friends with Dr. Richard Mays, who shared her passion for studying the supernatural, though his research tended more towards spells and mysticism. He often still helps out in her research, bringing her interesting new cryptids that his team have captured and, in return, Cassie will often advise the team on the best way to handle various supernatural creatures. And then she found a dragon egg… She’d already been going a bit off the rails anyway and had been toying with the idea of human-cryptid hybridization, and, well, dragons are famous in mythology for being able to hybridize with almost anything. She was lucky that Dr. Mays and her friend/ room-mate Dr. Lily Roberts managed to stablise her in time and halt the more drastic morphological changes, though not quickly enough to stop Cassie from accidentally burning her research notes as a flame-sack developed in her chest. Of course, the lose of the research notes means there is now no way of reversing the changes, especially as Cassie seems very pleased with the results of her self-experimentation and isn’t keen to research a method of reversion. 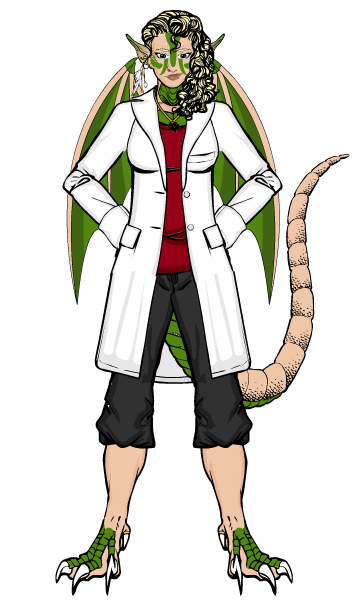