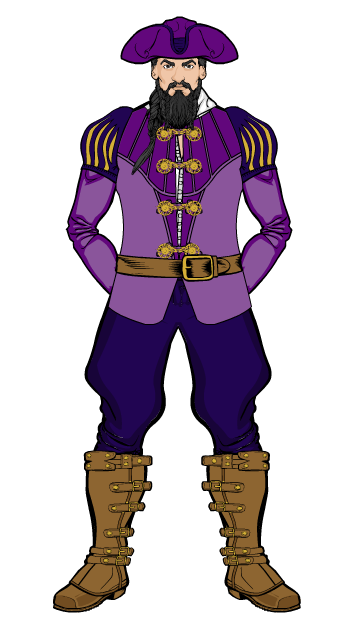 Born into a rich noble family in the City of Alva, Geoffreed inherited a fortune upon his fathers death and he spent little time putting it to use. He started by buying out many of the cities merchants, focusing on sectors at a time, consolidating every vendor he could under his ownership, until he owned practically every shop in Alva. Farmers, fishermen, carpenters and blacksmiths all had no-one else to sell their wares to and customers had no-one else to buy from. And then Geoffreed moved on to housing, due in no small part to a disasterous (and for Geoffreed, fortuitous) fire that engulfed the City some 20 years ago. With much of Alva destroyed by the blaze, Geoffreed financed the reconstruction of the city. At first this made him a hero to the people, but what they didn’t know was that Geoffreed had made a deal with the Lord Mayor that would see Geoffreed own every building he built and allow him to charge whatever he felt like for people to use his buildings, even if said buildings were literally built on the foundations of that persons former home. In exchange, Geoffreed promised the Lord Mayor that he would finance the office of the Lord Mayor and secure the position against challenge, which Geoffreed did. Of course, he never promised that he would do either of those things for anyone other than himself, so when he bought the seat of Lord Mayor it came as a shock to no-one. Of course, Geoffreed is deeply unpopular with the people of Alva, he owns everything they need to survive and now makes the laws of the city they live in, but how can they depose him? He is one of the Lords now, with power over the entire region of Maethglen (in which Alva is situated), any action against him would bring reprecussions from not just the city guard, but also the Knights of the Realm.