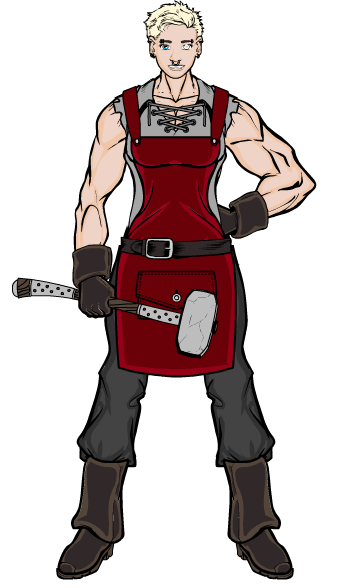 The finest blacksmith in all of Doredain, Freja has made everything from a gate for a farmers field to armour and weaponry for the Legion of Baron Ilhun, and everything between. Though she is highly sought after, she is very picky about who she offers her services to. If you can pay her price then she will work, but if you can capture her attention and her enthusiasm, she may even work for free. And she won’t be forced into taking a job she does not want. The Knights of Doredain have oft come to try to convince her to work exclusively for the kingdom, but have been rebuked each and every time. A fearsome fighter in her younger days (her muscles weren’t just built up by hammering iron and steel), Freja knows how to defend herself and her choice of abode makes that abundantly clear. She chooses to live in the ruins of Mithren Túr, one of the 3 great fortresses of Doredain that fell in a war between the kingdom and the Legion near 200 years ago, and the tower is long rumored to be haunted by a variety of ghosts and vengeful spirits. This, combined with her skill and demenor, has gifted Freja an aura and status amongst the people of Doredain that few but the Lords would dare challenge, not that she cares much for the fame or plaudits, her only dream is to create the perfect blade.