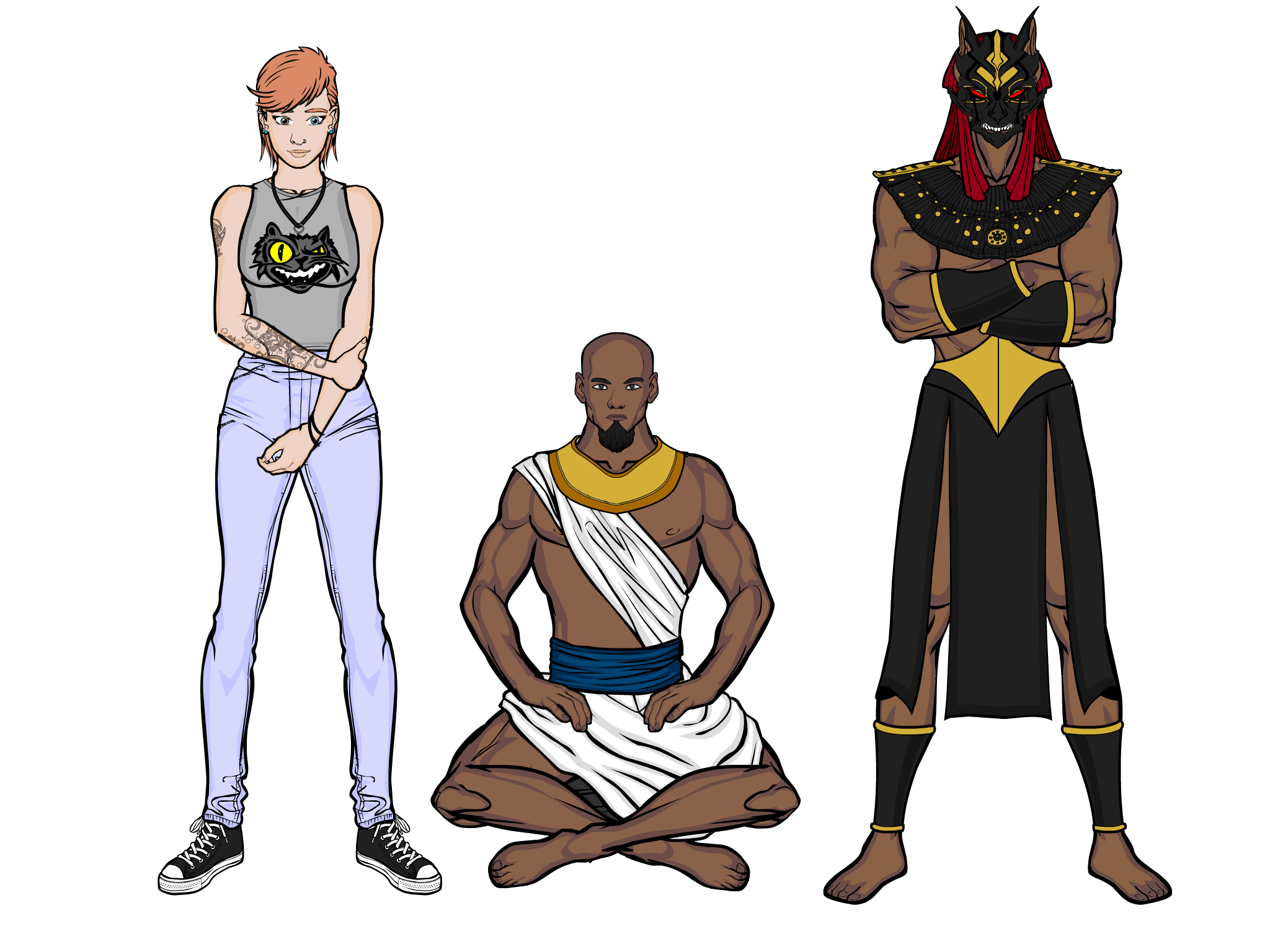 Angella “Angie” Peterson: Angie was Kiera’s girlfriend before Kiera became Amunet. Technically they haven’t broken up or anything, it’s just Angie is coming to terms with everything that’s happening. I mean, it’s not everyday that you partner both comes out as trans and becomes a magical-girl-esque superhero empowered by an ancient Egyptian god, it’s a lot to take in. She does support Kiera in her transition, but she sometimes feeling a bit like she was left out of the equation somewhat (not that those feelings make her feel any better, it just makes her feel horrible and selfish). Outside of her relationship with Kiera, Angie is a great lover of photography, she can often be found with a camera just taking pictures of anything that catches her eye. She hopes one day to be able to take it to a professional level and, maybe, have her photos displayed in a big art gallery.

Amenemhet: The ancient Egyptian priest who bestowed the Amulet of Divine Power on Kiera, facilitating her transformation into Amunet and the start of her transition, Amenemhet has been alive for 4 and a half millenia at least. Amenemhet was once just a normal priest of the god Amun in ancient Waset (better known as Thebes), however, a war broke out between the gods and the primordial evil. Though the gods were victorious and the evil sealed away, it was a costly victory. Amun was gravely injured and, in order to safeguard the world should the evil return, he bound his power to the Amulet and bade Amenemhet watch over it and chose his successor. Amenemhet has performed this duty countless times, each champion only being able to seal away the evil when it arises at the cost of their own life, much like Amun. However, despite his long life and seeing many people that he had come to know die, Amenemhet remains focused on his duty. Besides, immortality does have its perks. He’s been to basically every country on Earth at least twice, he’s seen technology and fashion change and evolve and he’s a big fan of trying new things, especially food and drink. He’s more impressed if someone can show him a food that he’s never tried than with any exploit any of his chosen heroes have ever performed.

Suetekh: The primordial evil, god of war, storms and chaos, brother and murderer of Osiris God Of Death, instigator of confusion and the destroyer. Suetekh goes by many names, Set and Seth being the most well known, and his jealousy and rage know no equal. A schemer, he has always desired power, but all he can do is destroy. Once, there may have been some good in him, he heroicly saved Ra, the Sun God, from Apophis the serpant. However, he grew vengeful and malevolent, first murdering his brother and then alligning himself with the very serpant he once defeated to war with the other gods. Though he was sealed away, the power he gained during the war was too great to be permenantly sealed.