Here is Liam Roarke, a student of the institute and a man who cannot die.

Liam is gifted with an incredible healing factor, he can survive any wound as long as some piece of himself remains. His blood also carries his powers and can be used to save life threatening injuries.

This was discovered when he was allowed to donate his blood to his father after they had gotten into an accident that had miraculously left Liam unharmed. His father healed instantaneously from several broken bones and some internal bleeding. His powers caught the attention of various groups who wished to use him.

He first spent time with a research institute who studied his blood while giving him a private education. This institute was attacked one day by a gangster hoping to steal its research. He found Liam instead and took him as his secret personal hospital. The gangster was older and respected, but not a cruel man. He kept Liam prisoner and used him as a blood bank, but he did not mistreat Liam. He made sure Liam had entertainment, mainly books. The gangster’s right hand was the sadistic Caza. Caza murdered the Gangster and found out about Liam.

Caza saw Liam as his perfect punching bag, a victim he could endlessly torture and discover new ways to inflict pain. He started with beatings before moving on to knives, guns, fire, electricity, before stopping with chemicals. Thanks to him, Liam knew what it felt like to have his skull collapsed in on itself, to have a knife twist in his heart, to have his body char and melt, and to have acid dissolve him slowly. Liam’s life was constant pain, but he was learning. Soon he knew the ways of the human body, how it ticked and what levels it could take.

One day when Caza was in his liquid nitrogen stage, their compound was raided by BSH. Liam broke out and sought his torturer. When the BSH agents found him, Liam was carving up Caza with a blade covered in his own blood, the gangster’s wounds healing as soon as the blade left. The agents pulled Liam off of the gangster and arrested him, freeing Liam from him.

Liam realized how sought after he would be and what a danger his presence would be to his loved ones, so he took the Institute’s offer of protection and tutelage, despite the fact he has no desire to be a hero. Liam now attends the school, jaded after having died thousands of times. He views the world coldly and pragmatically, knowing what horrors it contains and knowing horror can yield results.

Having felt every pain imaginable has dulled him to pain and made his attacks, when he is in a fight, seem almost suicidal in the lack of regard for his own well being. He also knows his blood can do miraculous things, so he has a tendency to be a bit extreme in his violence. He is the one who made Zaiar lose his eye after the attack on the school.

Slowly, but surely, he has begun to make friends and the Institute’s faculty hope Liam can be a kid again. 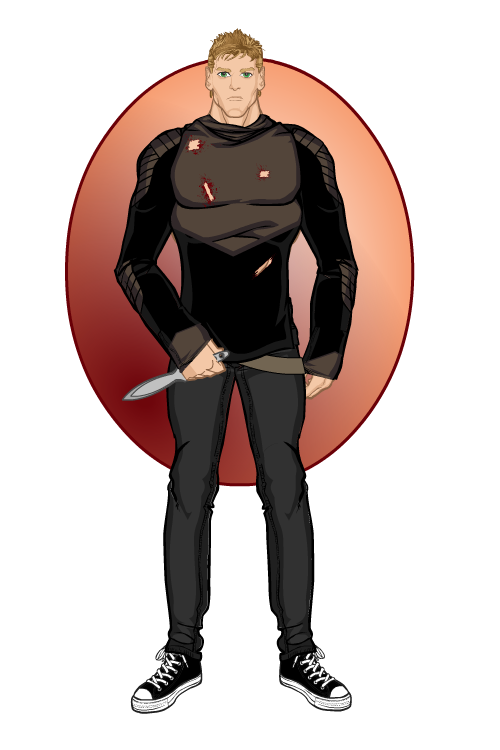