Yes, but it’s so much fun. Speaking of poses, here’s a gif of my monk character, Momo:

And the final image: 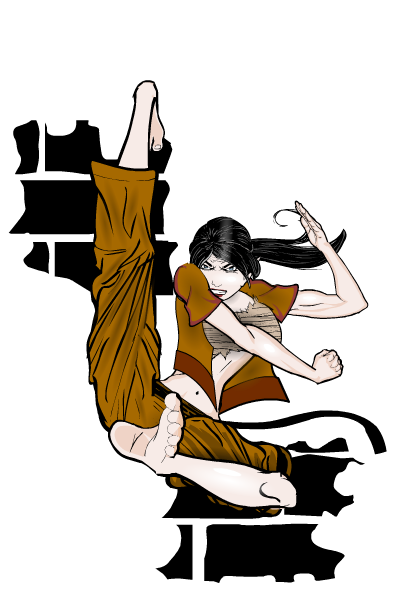 The fighter and paladin’s eyes opened wide in astonishment when they looked on the quiet monk next to Da’Maj. Until now, Momo had been invisible to them due to her complete stillness and Da’Maj’s overwhelming personality. Even her raven hair didn’t move, but Analisse only staired at her pointy ears.

Analisse had no great love of elves, save one. And now that Lee’lu had sent one, her love for him was waning. Without warning she shot her chain at Momo, who just as quickly caught the end in one hand and the rest of the chain with the other. She jerked the sickle out of Analisse’s hand and tossed it back at her feet. Analisse perceived a slight smile on Momo’s face as she picked up her weapon.

Before she could counter, the grimy drunk bursted out of the bar with angry, red eyes. While his eyes got used to the dark, he gazed on Momo and blurted, “Ooo…another pretty one, let me have a little kiss.” He stumbled toward Momo, who stepped out of the way while sticking out her foot. When his face hit the ground, Momo said disgustedly, “A fool desires fine food but will only feast on dirt.” Analisse couldn’t help but smile quietly as two figures looked on from the dark.