Here’s a gif of the Barbarian process:

And the final image: 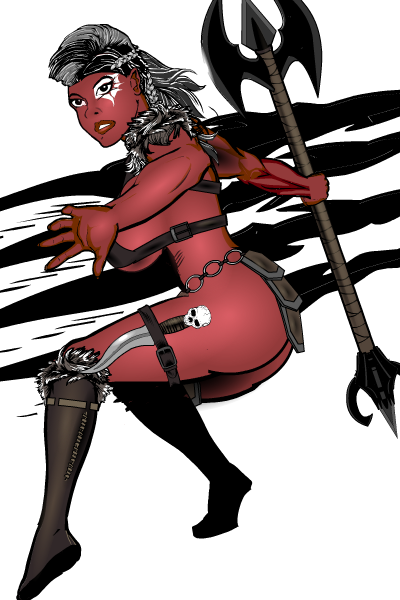 Before the voice’s speaker could be seen by human eyes, Analisse pounced with a ferocity that surprised Angelalea. Her face broke into a grin when she saw what was happening. The fighter had launched herself at Da’Maj but instead of knocking her off her feet, she found herself in a muscly hug. Angelalea’s smile was nothing compared to Analisse’s which almost out-stretched her face. “Keep trying, little one, maybe you’ll get me one day,” whispered Da’Maj after kissing her cheek.

The half-orc barbarian had raised Analisse since birth after being rejected by her elvish family. She taught Analisse to fight skillfully and love fully. Da’Maj pulled Angelalea and squeezed tightly with her free arm. “I think you are denting my armor,” Angelalea strained. Ever since saving Analisse’s life, Da’Maj treated her like a daughter.

“It’s so good to see my girls…oh, and Lee’lu sends his love,” said Da’Maj as she released them. Angelalea asked, “Your husband is not joining our adventure?” “No, he has too many students this season, so he sent his best one. Lee has never come across a more dedicated and skilled pupil, so please treat her as one of the family.”