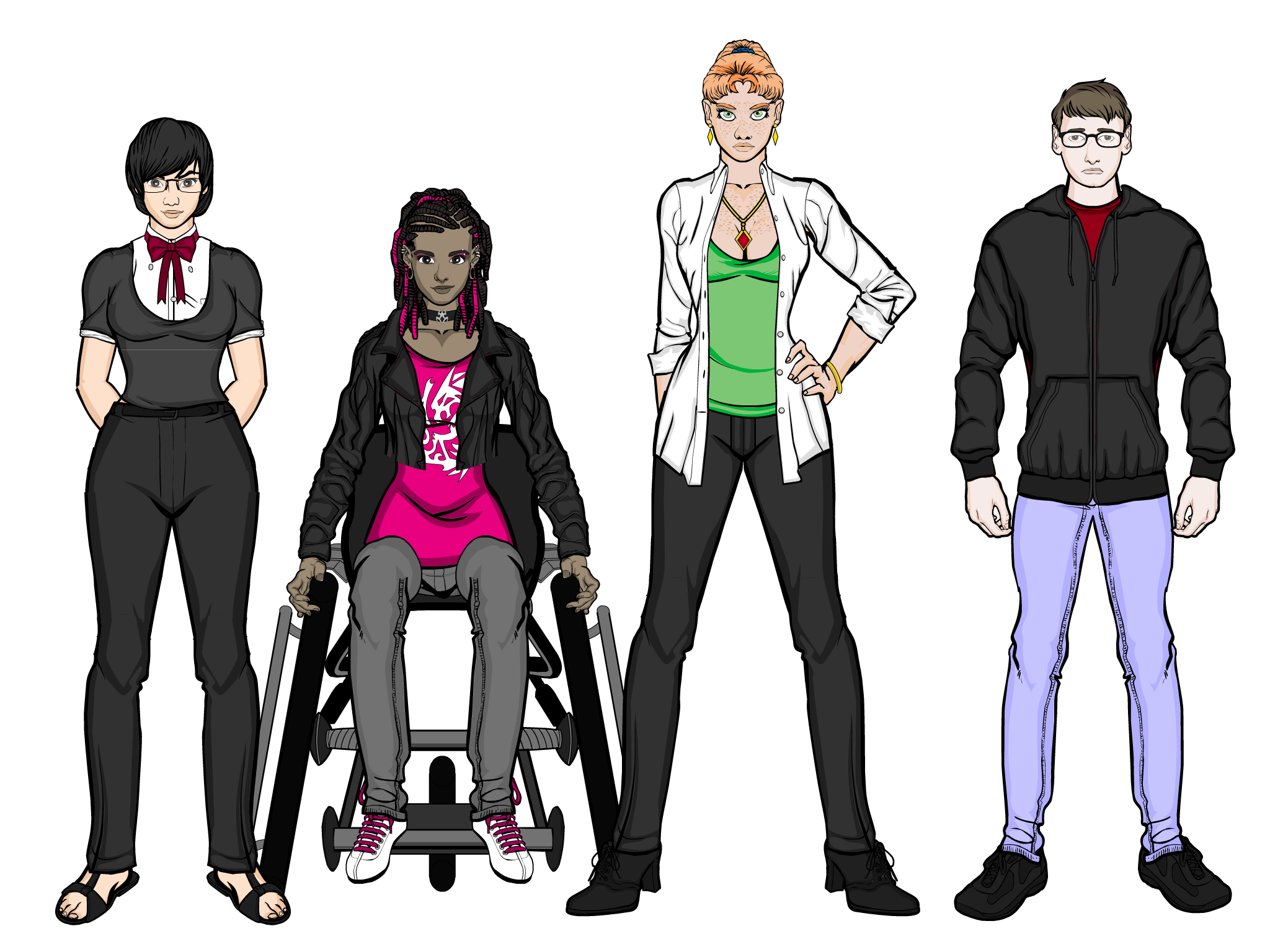 Left To Right:
Name: Masami Matsumoto
Position: Team Doctor
Extra Info: Japanese-American, worked as a surgeon before working for The Protectors
—————————-
Name: Jamie Walters
Position: Tech Support
Extra Info: A Technopath (someone who can influence digital technology with their mind), hacker and part-time dj, she hacked NASA, the FBI, the CIA, the UN, the FSB (Federal Security Service of Russia) and the Chinese Military before she was 18 years old.
————————–
Name: Gwen Peyton- Lance
Position: Team Coordinator
Extra Info: Former intelligence agent, in charge of relaying information to the team during operations, essentially team boss (The Titan might think he is, but he still ends up doing whatever Gwen tells him to do most of the time)
—————————
Name: Gideon Mantel
Position: Tech Support
Extra Info: Has Inate Capability (ability to comprehend any subject or object down to the most minute detail within minutes of learning the basics), has Asperger’s Syndrome and has extreme anxiety attacks when in high stress situations.
———————————–
JR Note:
So, both Jamie (Stinger) and Masami (Neuron) got removed from the team (Jamie being on the first version of A Division and then The Saviours, whilst Masami was on the second version of A Division). Well, I didn’t like the idea of Jamie, being a disabled character, essentially being defined by her disability. The whole “needing a powersuit to be useful” wasn’t how I intended it to play out, but since I did the A Division version of the character, I’ve been made aware of a few things that, at least to me, cast that sort of light on the characterisation I went with. So I scrapped it and just went with the layer beneath, as it were, of a girl who is tech-smart and just happens to be in a wheelchair.
As for Masami… well, she was actually going to be in this version of The Protectors, but she got removed last minute to make room for one character in particular (if you’ve been following me long enough, you should be able to guess which character got added last minute. She’s the character that was never in any previous incarnation of The Protectors or A Division and might give you a clue as to what I might be doing next). It really sucked to have to remove Masami from the team, but she was the least essential of the female characters to be on the team and the character that replaced her was one that needed to go on this team or she was going to be written out of history in a way, and considering how much I love this character in particular that wasn’t going to happen, hence her going in and Masami becoming Team Doctor.