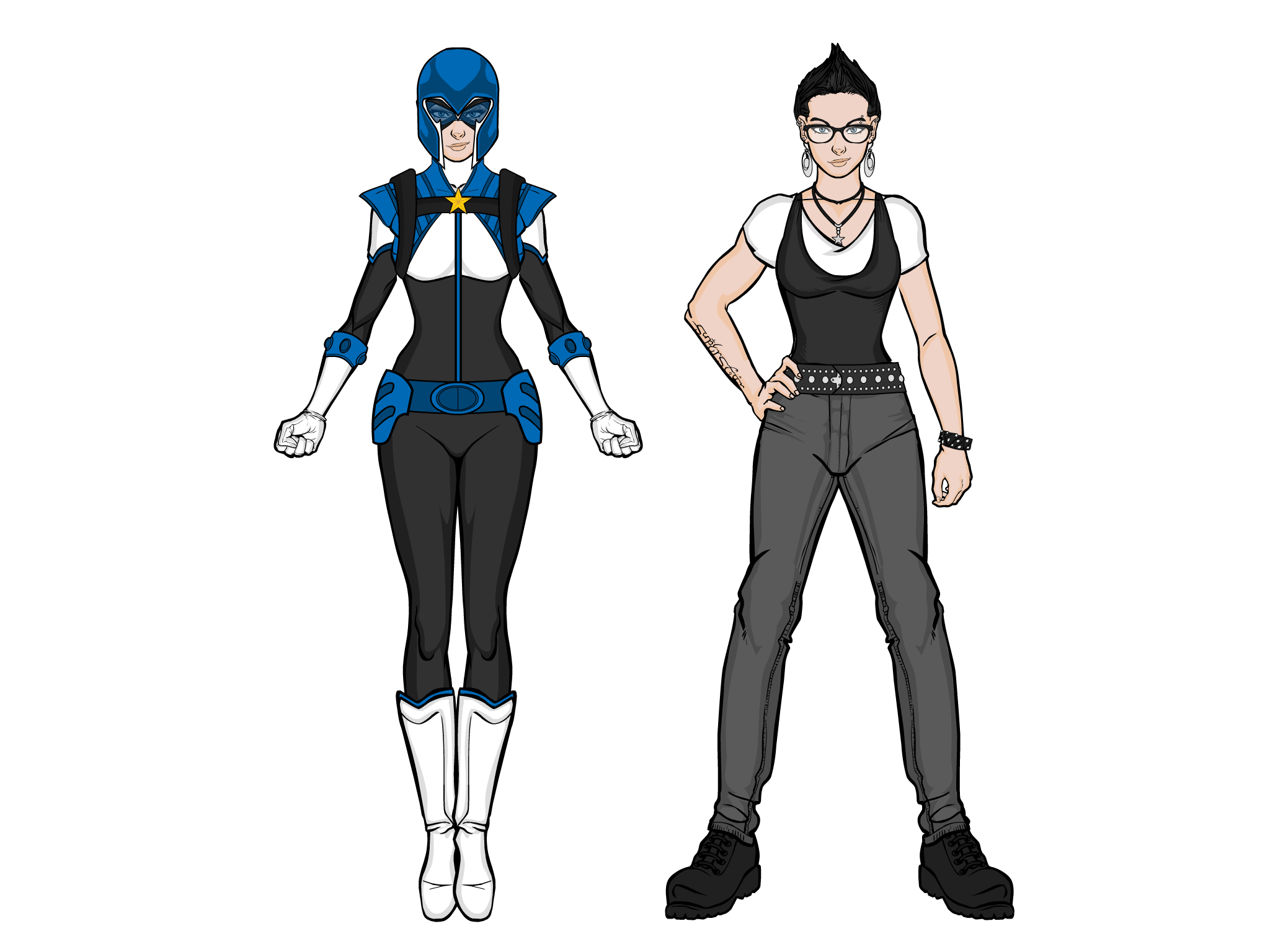 Name: Lucy Falkner
Codename: Superstar
Powers: Flight, Superstrength, Energy Projection
Bio: As a teenager, Lucy Falkner came across the wreckage of a crashed alien spacecraft. Unfortunately, the crafts engines were very badly damaged and it imploded, but not before Lucy was showered in a strange radiation. She was unharmed by the experiance, other than a few cuts and bruises escaping from the blast radius, but the radation had contaminated her system and given her the ability to fly and to control background cosmic radiation, even to project it in energy blasts. When her father, a failing publicist and PR man, found out, he saw an opportunity to get rich by turning his daughter into a work for hire superhero. Very quickly Lucy, under the pseudonym Star-Girl, became a bonefide celebrity and one of the most high profile superhumans on the planet, but she didn’t see much rewards from it. Her father took a large percentage of the profit, forcing Lucy to live off of an allowance and controlling every aspect of her life, from what she ate to who she was friends with. Lucy managed to find her way out of her fathers control when he began to get physical in his control of her life, taking him to court and making her identity public in the process. Though she did take a break from heroics in the aftermath of winning the court case, she found that she couldn’t live a peaceful life outside of the public eye anymore. Beyond that, she struggled to stop herself falling back into being a superhero, though at least she had control over what she did with her life now. When she was first approached by The Titan to join The Protectors, Lucy turned him down, feeling a team would restrict her freedom that she had fought so hard to achieve. However, as more and more of her friends joined as members, Lucy started to come round and would eventually join.
Random Extra Facts:
– Lucy is bisexual, but was forced to hide that fact when she was working for her father. In fact, he wouldn’t let her see any guys romantically, let alone any girls, trying to keep her public appearance as “wholesome” as possible.
– As Star-Girl, Lucy had long, bleached blonde hair (again enforced by her father, blondes are more marketable), which she absolutely hated. As soon as she was free from her father she cut it all off. She nearly went as far as shaving her head, but fortunately thought the better of it. All of the piercings she has are also post Star-Girl, as is the tattoo (which references her new superhero name, Superstar, a sarcastic nod to her previous “celebrity superhero” life). Also, she had to wear contact lenses all the time as Star-Girl and they were forever falling out. She much prefers the goggles she has currently.
– Though she didn’t see the majority of the money she earned as a work-for-hire superhero, her fees were such that the allowance she did get, plus the winnings from her court case against her father, was substantial enough to make Lucy a multi-millionaire in her early twenties. Though Lucy does still use her money for herself (she has a very nice and very large house, as well as an expensive car), most of her fortune has gone to the victims of superhuman crime and various global disaster relief funds.
– Being one of the most high profile superheroes before joining The Protectors, Lucy knew pretty much everyone on the team before joining (the exceptions being Andromeda, who went missing before Lucy became a hero, and The Watchman, who only recently took over the role from his predecessor). Outside of The Protectors, she is very close friends to Lance and Leigh Walker, who, in their civilian roles, provided Lucy with legal counsil during her court battle.

– Lucy is a very poor drunk. It doesn’t take much to get her wasted and when she is she can be all over the place. As one might expect, the first few months of freedom were wild, and publicly so, with the police having to get involved in one particularly raucous house party. Luckily though, Lucy did have a few good friends to help reign her in and get her back on the straight and narrow.