So I actually made this guy as a sort of loose concept for an Overwatch hero quite a while ago but never bothered to post him (I may have forgotten about him) but I was watching coverage of Blizzcon yesterday and the reveal of Overwatch 2 finally kicked my brain into motion again and reminded me of this guy.

I had no real idea of what I wanted this character to be when I started. I just wanted to make something. So I found a random country generator and it gave me the United Arab Emirates. So that’s where he’s from. Now I don’t speak Arabic, unfortunately, but Google informs me that “Jihaz” is the Arabic word for “Device” or “Machine” or…something like that. Google translate is hardly the best source. But if it’s either of those words then it fits well with his general gimmick.

I see Jihaz as something of a multi-class hero, fitting somewhere between DPS and support, depending on how the player chooses to use him. Jihaz has a number of drones that can perform various functions, determined by the player before use and can either be used by Jihaz himself or sent to accompany a teammate. They can either work as airborne turrets, something like Torb’s stationary turret but less annoying, and target whoever Jihaz directs them to or simply attack the nearest enemy if accompanying a teammate.

Their second mode provides either shields or healing to Jihaz or whoever they happen to be accompanying. Jihaz needs to determine which mode they’re set in before sending them out and if he wants to change the mode, he’ll have to recall them and send them back out after a short cooldown.

The drones have minor shields of their own can be destroyed by enemy fire, which starts a somewhat longer cooldown while they’re repaired. I think this would force some tactical thinking when playing Jihaz as he could theoretically recall a drone before it’s destroyed but he would be leaving his teammates without support. Sending drones to teammates also limits Jihaz’s personal firepower so the player would have to consider that so as not to leave themselves defenceless should a huge angry gorilla happen to catch them alone.

I also like the idea of Jihaz being able to hold onto a drone and have it lift him to a higher vantage point but I’m not sure if this would work with other characters who lack a lot of mobility like Ana, for instance.

I haven’t figured out what his Ultimate would be yet so if you have suggestions, feel free to share them with me.

Now obviously I’m not a professional at things like this so some of the things I’ve suggested here may not work or even make sense but I like this guy anyway. I had fun making him and figured it was about time I shared him.

And if you’ve made it this far without tuning out, have a cookie. 🙂 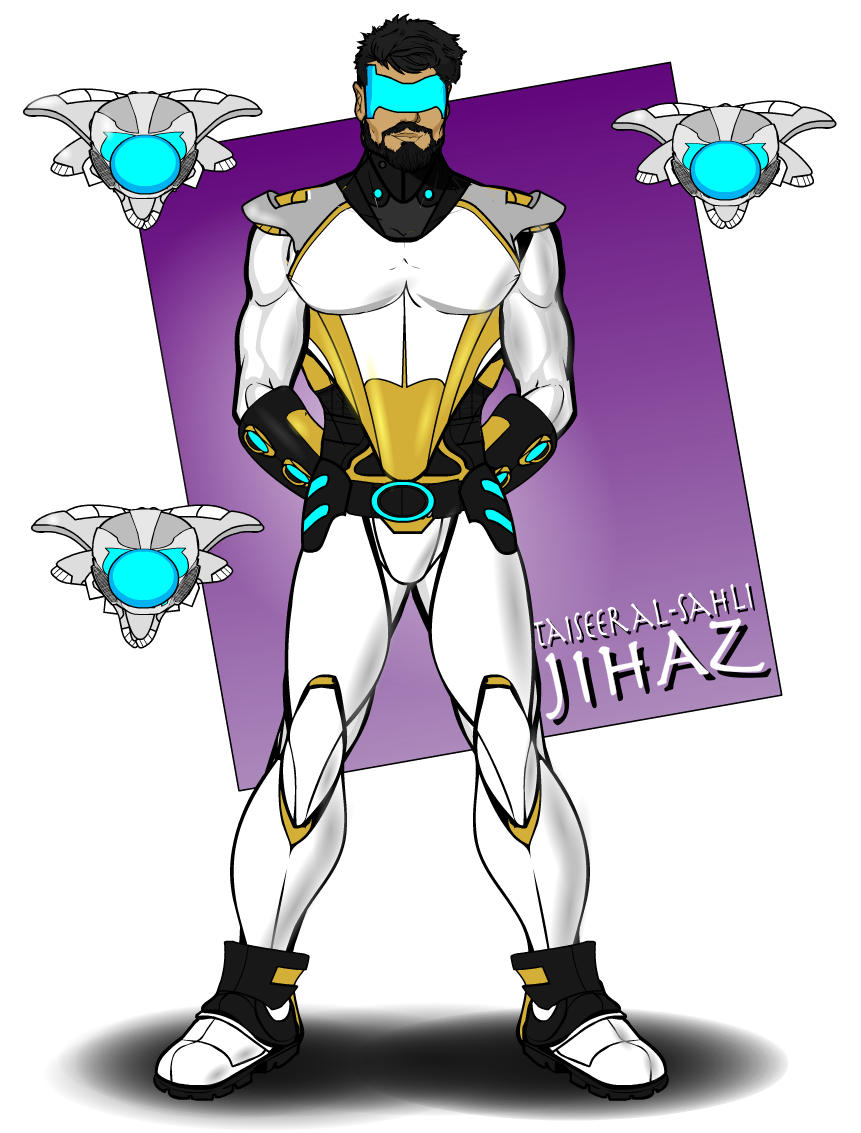