Calvin McCoy gained the nickname Bones in medical school thanks entirely to his surname and his classmates lack of creativity. Calvin graduated at the top of his class but he had somewhat ulterior motives than his fellow students, albeit incredibly altruistic ones. Having been born with the incredible ability to heal others with only a touch, Calvin gained a medical degree entirely as a cover for using his ability to help people without gaining the attention of the world at large which would surely impede his good works. He also had no intention of masquerading as one of those idiot “faith healers” who claimed that God granted them miraculous powers. As a man of science, Calvin saw such people as charlatans and frauds.

Becoming a truly great force for good in the world, Calvin helped a lot of people and slowly started aiding superheroes long before the likes of Trauma and Nightingale began acting as superhero medics. The name Dr Bones became well known within the superhero community as someone who could be relied on to cure your wounds without asking the questions that hospitals would.

The friendly and incredibly charming Bones was a good man, some would say a great man, but even great men can break. When attempting to heal the hero Rime, Bones’ powers seemed to backfire and rather than heal, he sucked the life force from Rime, killing the hero by accident.

Bones was so traumatized by this that something snapped in his mind. To the rest of the world, Rime just seemed to disappear but Bones knew what had really happened. He covered up the heroes death and got away with it. Worse still, he realised that he kind of liked the thrill of doing something so terrible. Before now, the mere thought of doing something so terrible would have repulsed him but he now found that he was fine with killing. He enjoyed it.

Not brave enough to attempt to kill more supers and have a trail lead back to him, Bones began killing normal humans, leaving a trail of bodies, growing more disturbed with every kill. No one seemed to be able to find a cause of death for any of the victims that made any sense but the general consensus was that a meta-human was to blame.

Bones may well have gotten away with his crime spree if one of his victims bodies hadn’t crossed the path of Anansi, a medical examiner in his civilian life. Conducting his own investigation, Anansi managed to track down the killer, confronting Bones and almost losing his own life in the process. Anansi was able to apprehend Bones and Calvin’s identity was revealed.

His old life was over from that point. Not only was he locked away, his friends and family disowned him and his medical licence was revoked. He spent several years in a maximum security prison for meta-humans where he received some much needed therapy. Over time, Calvin started to re-emerge and the insidious Bones faded. Calvin was genuinely repentant for his crimes and several years after his imprisonment, he was assigned to a black ops team of meta-human criminals in an attempt to use their powers for good. Under the leadership of the hero Scarlet, Bones and a number of others (Jett, Aurach etc) actually did some good and helped stop some truly dangerous threats to the world.

It was hoped that Calvin was truly cured of his psychological issues and even after Scarlet’s team was disbanded he showed signs of returning to his old self. Unfortunately, when Nevermore attacked Shaman within the prison, several inmates managed to escape and Calvin was among their number.

Bones reappeared shortly after and seemed as twisted as ever. This time though, he seemed intently focused on Trauma who was himself a healer. Bones seems intent on corrupting the younger man the same way he corrupted himself.

No one is sure what happened to Calvin to make him revert to his evil ways but he has more than a few people trying to find out why and trying to put him back behind bars, Scarlet, Trauma and Anansi are just a few of the heroes who want to put an end to Bones’ reign of terror. 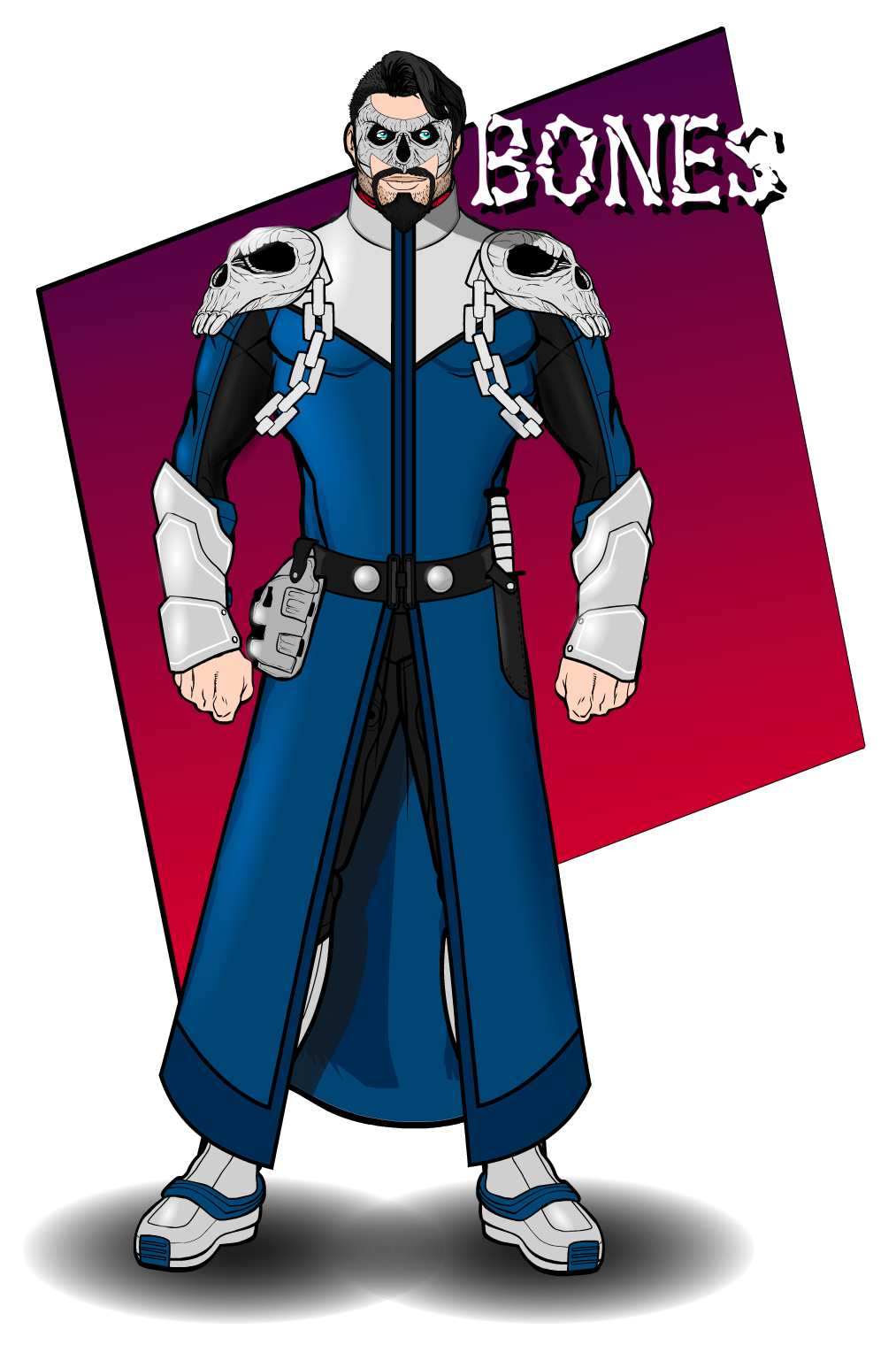