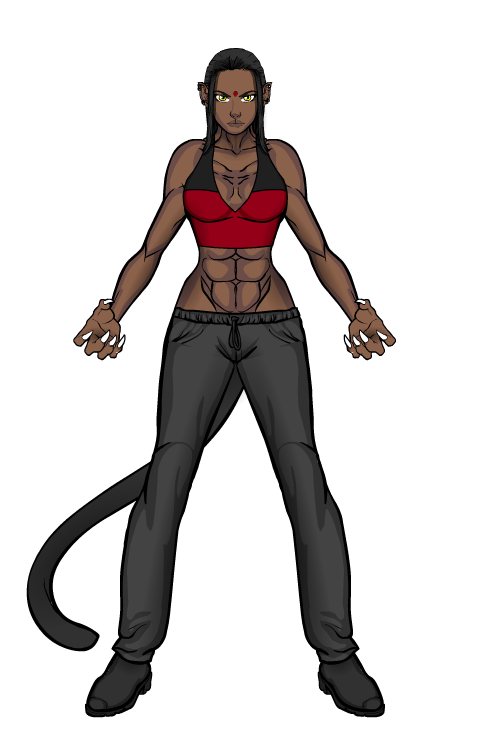 The daughter of Indian immigrants, Riya Raman was born with numerous cat-like adaptations as a result of “The Moment”. Her skeletal structure is more feline than human, she has a extra thoracic vertebrae and two extra lumbar vertebrae, as well as the extra caudal vertebrae that make up her tail. Like a cat, she has elesticated tissue disks between her vertebrae, making her spine increadibly flexable and cushioning her from the impact of high falls. Her clavicle bones are free floating, unlike a human clavical, again giving her more flexability than any normal human. Also, like a cat, her hands and feet are equiped with retractable claws, which she can use to climb any rough surface. Her senses are also more cat-like than human, her hearing has a range of 10.5 octaves (compared to a humans 9 octave range) and a far more acute sense of smell. Her sight, however, is a mixture of human and cat, with her eyes having a reflective layer of tissue at the back of the retina in a simular way to a cat, which gives her excellent night vision. However, unlike a cat, she has the same number of cones and rods in her eyes as a normal human, meaning that her colour vision is at normal human levels. Her reflexes, agility and senses are enhanced by her overall physical fitness and she is very skilled in combat, employing an unorthadox fighting style tailored to her unique physiology. Whilst her more unusual physical attributes (alongside her heritage) made it hard for her when growing up, her abilities have made her invaluable to Outsider Investigations, as she is able to get into places that would be impossible for any normal human and her enhanced senses make for an excellent early warning system.