Patient Information: Richards is an interesting case. He suffers from Narcissistic Personality Disorder, which has exegerated his sense of self-worth and his need for admiration alongside a trait that sees him project his own views onto other people, leaving him almost unable to see or hear critisim. This part of his psychological profile is complemented by an extraordinary delusion, which sees him take on the role of a King figure based upon the King of Hearts character from your standard playing card deck. These conditions would not be so bad on their own but become concern when two other aspects of Richards personality is taken into account. He is ruthlessly intelligent and exceptionally charismatic, which allows him to easily manipulate people. He managed to gather himself together a small criminal gang (which he based off of playing cards, as per his delusion, assigning each member of his gang a rank and position based off of a corresponding card) and transform it into a nation-wide operation of thieves, money launderers and drug dealers, with himself at the top. The other aspect of his personality that makes him so dangerous is his unpredicable temperament. For all his charm and intelligence, Richards is capable of horrific acts of brutality (as seen in the Vasquez case of 2012-13) if he feels provoked. He was commited to Emerson Lake after his gang was sold out by the brother of a former member that Richards had killed. Richards lawyers argued insanity as a way of ensuring Richards didn’t see death and it is hard to argue that the man is, by definition, insane. However, it should be noted that at no time should staff underestimate him. His sanity may be questionable, but his cunning is not and he is for more mentally able than most inmates in our care.

Doctor: Taped Patient Interview with Patient E-128760: Richards, Henry. Session 1.  Conducting the interview is Doctor Clifton Love. Hello Henry, how are you today?
Richards: Good afternoon Doctor. Unfortunately, I cannot say that today has been a particularly good day, but manners compell me to wish you such.
Doctor: How has today not been good Henry?
Richards: Well, one cannot pretend that ones accomodation is anything but unsatisfactory. You have me locked up in this place with common criminals and lunatics, it just won’t do. I am used to a certain level of luxury and that requirement is not being fulfilled. Now, I am aware that an establishment such as yourselves cannot afford to serve lobster or kobe beef, so one does not expect it. However, the quality of the matresses is disgraceful and the pillows offer no neck support. And the lack of privacy is insulting. The fact that I have to spend my time in a room that has a window in the door so as anyone passing by can see me at all times is not acceptable. And do not get me started on the lack of respect shown around here. I should be address as either Mr. Richards or Your Majesty at all times, as befitting of my royal stature. The fact that someone of your level of intellect and professional standing is refering to me by my Christian name is unprofessional and childish, you should be ashamed of your self.
Doctor: That’s how things work around here Henry. You are here to be treated for your delusions…
Richards: (makes disapproving and disbelieving noise)
Doctor: And as such you are to be treated just like any other patient. You have exactly the same sort of cell as everyone else, the same sort of pillow and mattress. The window in the door is so the guards can see if you are having a seizure or trying to hurt yourself, which does happen with a number of our patients. And we call you by your first name because that is protocol. It helps settle some of the more disturbed patients. Unfortunately, we have to follow protocol. I’m sure you, of all people, would understand that, surely?
Richards: Yes, quite. We all must adhear to protocol. I insisted on it with my pack. But you must understand my plight here doctor. I get awful cramps if I do not sleep properly and I struggle so with these condtions. My body just isn’t adapted to this sort of lifestyle.
Doctor: (sighs) I will talk to the Infirmary, see if we can get one of the MD’s to come down and examine you. If they see there is something wrong, we might be able to put in a request for special bedding. However, this would be conditional on good behaviour.
Richards: Of course. Even I would not expect something for nothing. 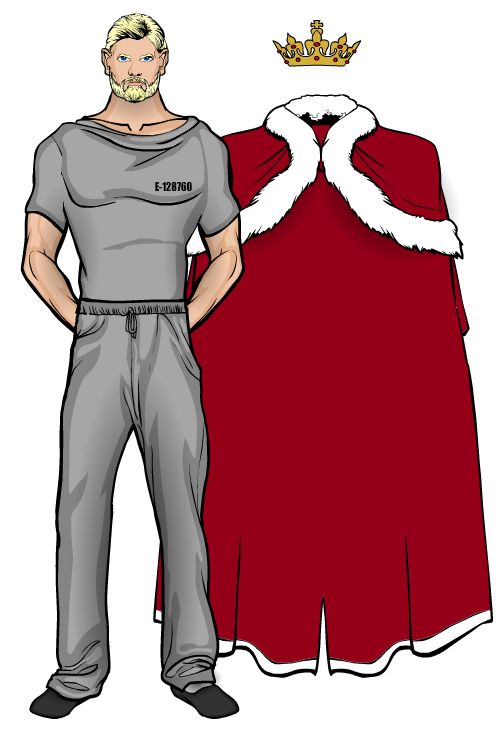