Patient Information: A cannibal, Victor Gullan was commited to the Emerson Lake Asylum upon his arrest for a string of homocides over a two decade long period. Much of what was left of his victims was found in various places around the house in which Gullan lived, though a large amount of each of the desceased was missing due to both decay and Gullans own eating habits. Based on information gained from interviewing Gullan, it can be concluded that this behaviour stems from his childhood as well as brain damage from a childhood incident. His family lived below the poverty line and often struggled to afford enough food to feed themselves. Gullan also says that his elder brothers physically abused him as a child and would steal any food he had, leaving him to scavenge for anything edible he could find. He claims to have eaten rats, cats, dogs and pigeons to survive before stumbling onto a dead vagrant at one point during his early teens. Gullan is not clear on why he decided to eat a dead human, but it is clear from medical examinations conducted upon his arrival at the asylum that around this time Gullan recieved a fracture to his skull from a heavy blow to the head which caused a traumatic brain injury (TBI) to his left frontal lobe. This injury is likely to have caused problems with Gullans descision making process, as seen in other cases of TBI in this area. He shows other symptoms congruant with the injury, problems with his memory, social deficiencies, impulsive behaviour and slight problems with his motor functions. Whatever the cause of his cannibalism, it is abundantly clear that the habit has become all-consuming (a symptom of cannibalism long documented, often likened to drug addiction) and it has been hard to persuade Gullan to eat “normal food”. He has had to be feed intravenously on a number of occasions in the asylum infirmary to prevent him starving himself to death and, early on in his tenure, he was regularly under physical and chemical restraint due to his numerous attacks on hospital staff and other inmates, during which he would attempt to bite their arms, legs and shoulders. These attacks have become less frequent as his treatment has progressed, but there is still a worry that he may have an incident at any time, especially whilst he still refuses to eat.

I like chops the best. Take a slab off the back, fry it up with some butter, pinch o’ salt n’ pepper, like you would a pork chop. Ribs ain’t bad, but not much meat on ’em and not as easy to butcher. You get some good meat off legs mind. That guard there, he looks like he’d have some good eatin’ from his legs. You wouldn’t though, too fat. You’d taste good an’ all, but I’d be pickin’ you out my teeth for weeks. 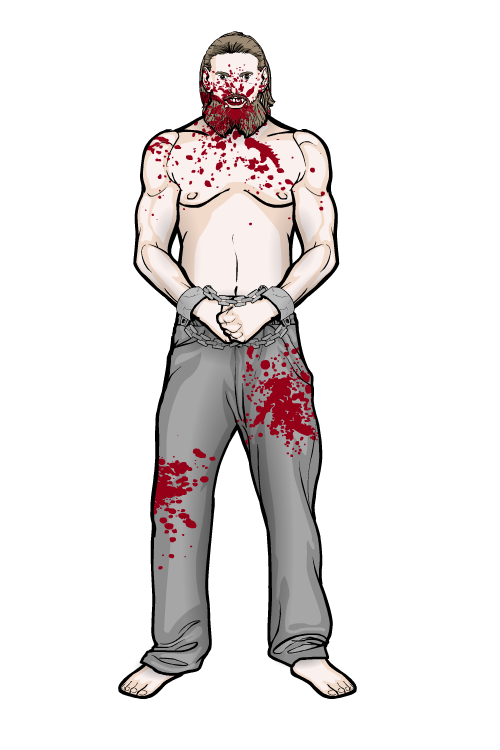