Patient Information: Dyer appears to suffer from DID (Dissociative Identity Disorder, commonly known as Multiple Personality Disorder). She certainly shows a convincing case to suggest one markedly different alter alongside the host personality. The host, Amy, is a rather meak and shy girl with a pronnounced stutter, whilst the one identified alter, Amanda, is highly volatile and aggressive, with a tendancy towards pyromania. As of yet, staff are only aware of these two personalities, and there have been no hints of any others. It is obvious from documented evidence (police reports and child services documentation) that Amy suffered a great deal of physical and mental abuse during her formative years, before she was taken away from her family at age 6. We can speculate that Amanda formed around this period, as it fits the developmental time frame for the disorder and events from this time could also explain her pyromania, as a barn fire at her family’s farm killed her elder brother and family dog during her early years. In interviews with asylum staff, Amanda has admitted to going out and starting fires in local properties as a teenager to cope with the stress of being in the foster care system. Evidently, these fire-starting trips would become more regular and more reckless as she grew older. When questioned about this, Amy claimed she has no knowledge, as is congruant with cases of DID. Dyer came into the asylum’s care after being caught in one of Amanda’s arson attacks. She was badly burnt in the incident, however, treatment at the local hospital became complicated as Amanda refused skin grafts and even attacked the doctors that treated her, whilst Amy was in a near catatonic state due to the shock of waking up in the hospital badly burnt with no idea what had happened for the entire time her personality was in control. Fortunately, since being commited, Dyer has shown great improvement, through a treatment schedule of anti-depressants, anti-anxiety drugs alongside regular cognative and creative therapy sessions and incidents of Amanda taking control have become few and far between. However, Amy has become quite scared of Amanda since becoming aware of her second personality and there is still a high risk of a mental break when she is exposed to high stress situations (see 07/07/16 incident. Amanda nearly blinding Doctor Roberts after Amy recieved the news of a former foster mother’s death) and it is also worth noting that, early on in the treatment, Amanda would regularly self-harm, which lead to the application of chemical and physical restraints to Dyer whenever she was left unsupervised.

Doctor: Taped Patient Interview with Patient G-001694: Dyer, Amy. Session 9.  Conducting the interview is Doctor Jeremy Hollingshead. Hello Amy, how are you today?
Amy: H-hello Doctor. I-I’m… okay I guess…
Doctor: Doctor Levering tells me that you’ve been very well behaved since our last session. Taking your medication, staying out of trouble, you haven’t had an incident in a few months now, is that right?
Amy: Y-yes d-doctor.
Doctor: Yes, you have made very good progress. Hopefully we will soon be at the stage where we can get those burns of yours taken care of.
Amy: *whimpers*
Doctor: What’s wrong Amy? Do you not want the Doctor to treat your burns? I thought you said that they were still painful? If we get them seen too we can decress your medication and start the next stage of your treatment. Do you not want that?
Amy: I-it’s not that s-sir, i-it’s just… s-she d-doesn’t like t-the i-infirmary. A-and I d-don’t w-want her t-to g-get out again y-you see. I’m a-afraid t-that s-she’ll hurt s-someone again, or hurt m-me… 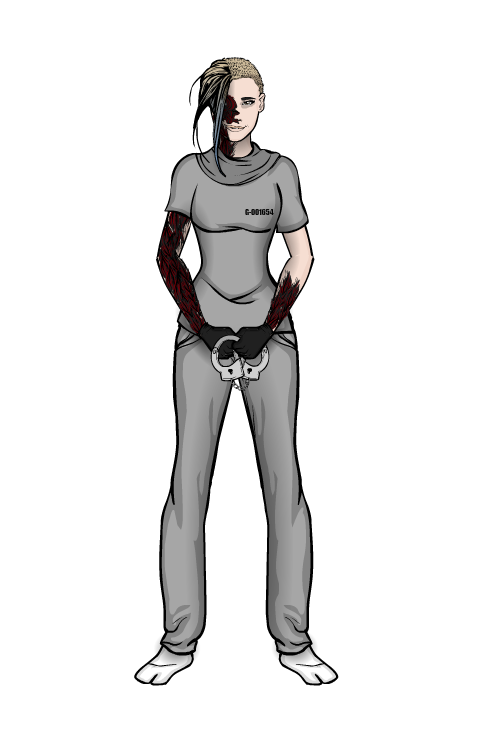