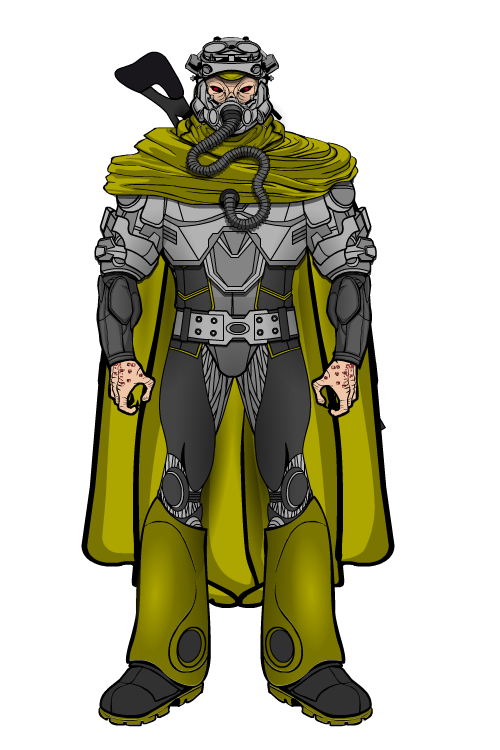 One of the Galactic Republic’s most well known and dangerous bounty hunters, Kett Nova is one of the last Varakaryan’s left after the destruction of Varakar some ten generations ago. Little is really known about this enigmatic killer, except that he plies his trade by hunting only the most valuable prizes and demands and equally high price. His exorbetant fees are unquestionably worth it, as he is not recorded to have failed a single job. Like most bounty hunters, he has a signature, a recognisable method of killing to let his clients know of his success. Nova’s signature is his use of disintergrations, rarely leaving behind any evidence of his targets, save for a specific bodypart Nova will remove before the act which is agreed upon by the client as a means of identification. Whilst he may be one of the most dangerous killers in the galaxy, Nova isn’t without his own failures. He is forced to wear a respirator helmet after his face was crushed during a fight with another bounty hunter over a mark. Of course, the other guy came off worse, but Nova is still troubled by the injury and has become notably less active since. However, it has not stopped him from joining every other bounty hunter in the galaxy in answering the Cosmic Council’s offer of a trillion credits for the head of the Svetalen criminal Omnion, though the job has brought quite a few unexpected twists. First picking up a Dvaarin helper who also wished Omnion dead, he would later end up hosting a number of others hunting his mark for their own reasons. As none of his cohorts are interested in the bounty, Nova humors them, seeming to enjoy their disfunction and quarrelling. After all, how better to learn about potential targets than by fighting alongside them?