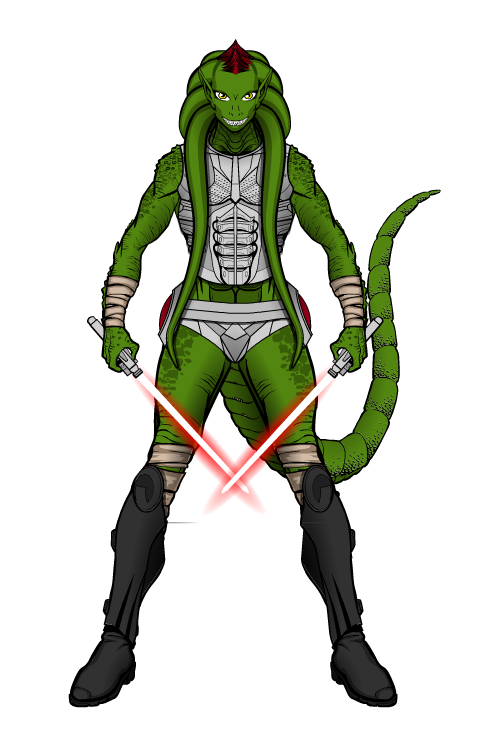 One of the few notable sentient races to not be part of the Galactic Republic and still have notable power and influence, the Dvaarin have a small empire that spans a few dozen systems around their home planet of Hakalr. Dvaarin’s are generally a social race, their extremely quick reproductive cycle means family groups can number in the hundreds, but are often hostile to other races and are dangerous due to their hostile natures, intelligence and carnivore insticts. They invade other worlds to use as breeding and hunting grounds for their ever increasing population. However, their empire took a major hit recently, when one of their major breeding planets, Khalu, was attacked by the galactic scourge known as Omnion. He caputred a large number of Dvaarin’s, as well as other indiginous wildlife, and then decimated the planet, scorching the surface so as nothing could inhabit it for at least a thousand years. There were some survivors from the Khalu colony though, a few Dvaarin’s were off world when the attack took place. Those survivors lost their families, their homes and everything they knew and many swore revenge. D’Jala Ren was one such survivor, teaming up with a reknowned bounty hunter who agreed to help her track and kill Omnion, so long as he could claim the bounty when she was finished. This would eventually lead to the pair joining forces with other likeminded individuals after Omnion fled his hideout, which D’Jala is not too pleased about, as it means she has competition as to who get’s to kill their target first. However, she is pragmatic enough to know that she stands a better chance of achieving her goal by staying with the group than by going off on her own and, if worst comes to worst, she can just kill everyone else too.