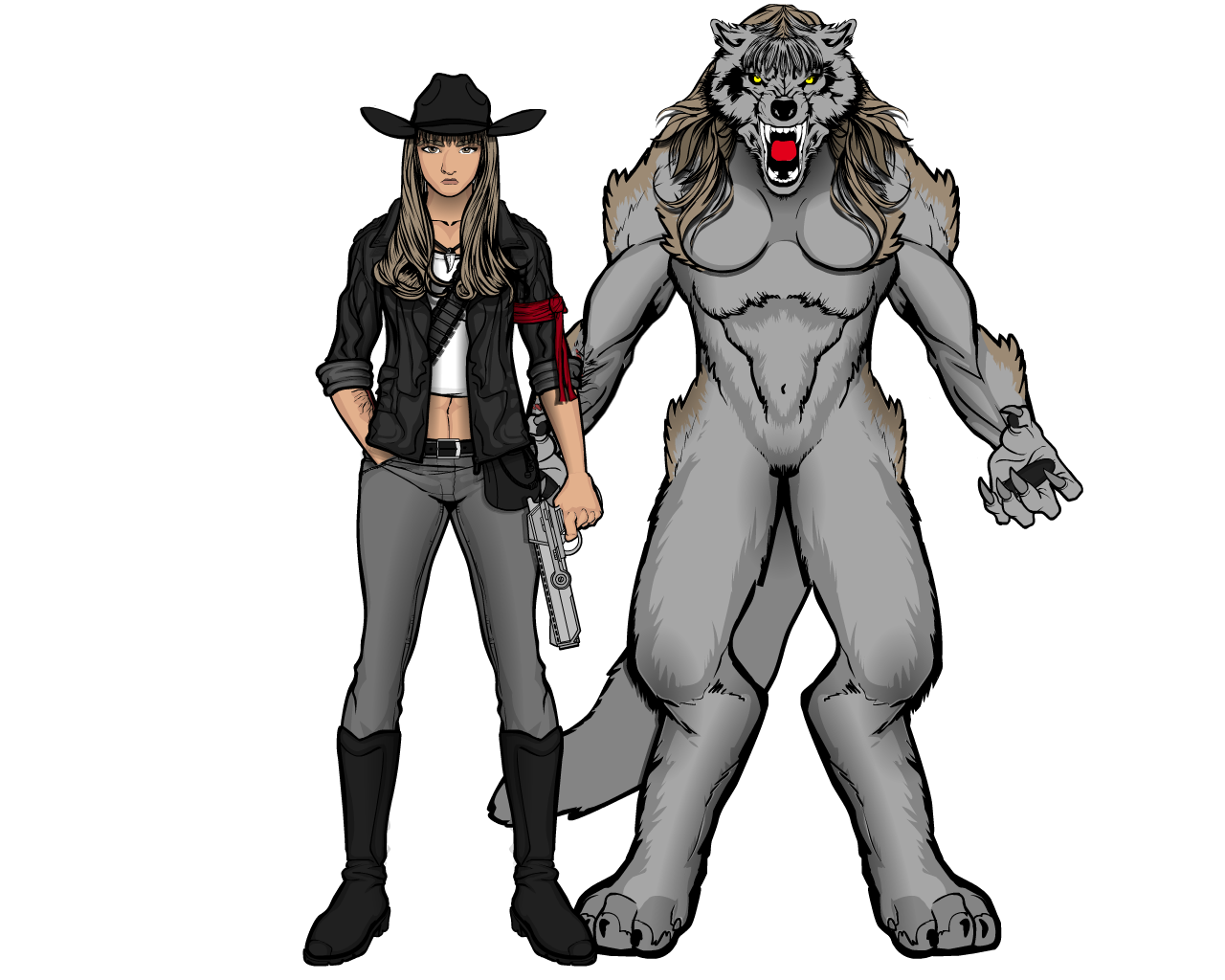 SRC Report
Name: Tracy Samuels
Codename: Wolf-Hunter
Age: 23
Height: 5.8ft (human)/ 6.5- 7ft approx (Werewolf)
Weight: 138lbs (human)/ 220- 230lbs approx (Werewolf)
Bio: An expert in hunting and exterminating large beastial cryptozoological creatures (most often Werewolves, but also including other large game such as Wendigos, Swamp Monsters and Ghouls), Ms. Samuels performs her duties in a calm and collected manner, with an impressive success rate. Of Native American descent, she first became a werewolf after being tricked and bitten by a (now former) boyfriend on a first date. Apparently wishing to build his own harem of female werewolves to consolodate his leadership of the local pack, the Werewolf was scared off by a local wolf-hunter (as those who hunt Werewolves are wont to call themselves) who took Ms. Samuels under his wing, supplied her with the medicine required to control her condition and gave her the knowledge and skills she would require to extract her revenge. She would later kill the werewolf who infected her and take control of his pack as a way of controlling the local werewolf population. Though she remains stoic and generally emotionless, Ms. Samuels appears to worry a great deal about her condition and never fails to take all conceivable steps to prevent her transformations, obviously fearing what may happen if she were to lose control.
Relationships:
Azaria Thomas: Ms. Samuels and Ms. Thomas have a strong friendship and knew each other before coming to work for the SRC, often working together on projects that were too much for either to handle individually. They make an excellent team and their undeniable chemistry allows both to perform on the fly with little verbal communication. By all accounts Ms. Thomas is also one of the few people in the department that may stand a chance against Ms. Samuels if she were to lose control of one of her transformations.
Victoria Lewis: Ms. Samuels and Ms. Lewis appear to get on fairly well. Both has increadible empathy for the other, due to their unfortunate conditions being very simular, unwanted and potentially very dangerous to everyone aroud them.
Gabriel L’Angelo: As with most of his teammates, Mr. L’Angelo isn’t on the best terms with Ms. Samuels, though she does tolerate him far better than Ms. Thomas or Mr. Finch. Whilst neither are exactly “friendly” towards the other, both have a readily apparent respect for the others abilities, and Mr. L’Angelo is more respectful of her condition due to it “not coming from her sin, but the sin of another being forced upon her” as he says.
Alex Finch: Ms. Samuels and Mr. Finch have what can best be described as a “working relationship”. She finds his knowledge of the arcane and his skill with potions to be useful but finds his attitude to be lazy and unprofessional, whilst he respects her abilities but feels she could “lighten up a bit”.