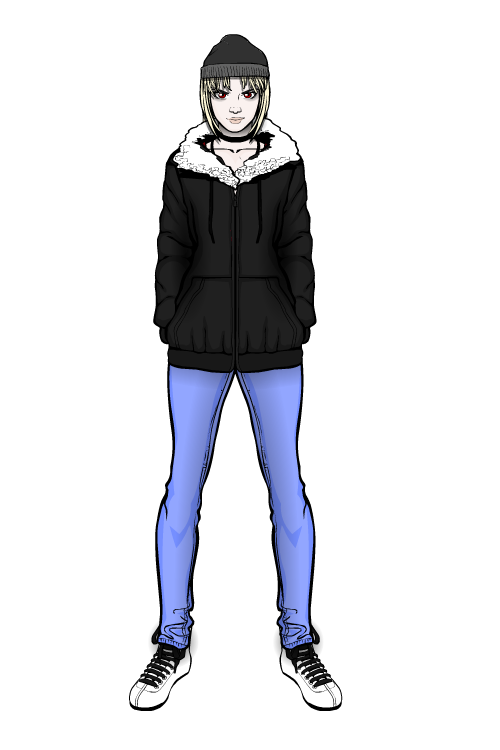 SRC Report
Name: Victoria Lewis
Codename: Nightwatch
Age: 19
Height: 5.5ft
Weight: 115lbs
Bio: One of the 0.000001% of the worlds population born with psychic abilities (colloquially known as Espurs), Ms. Lewis has strong psychic powers, measuring a level 3 of 6 on the Harrison Scale, she is able to lift objects around twice her body weight telekinetically as well as having some limited empathic and persuasive abilities. However, her experiance of the supernatural does not come from her psychic abilities, but rather the fact that she is also a vampire, having been biten when she was 16 years old. Normally, a person afflicted with vampirism would lose their mind to the bloodlust the condition causes, but Ms. Lewis’ powers seem to counteract the psychological effects of the virus. That is not to say that the virus hasn’t manifested its self in other ways. As with all vampires she suffers greatly from a high sensitivity to UV rays and has severe reactions to certain chemicals contained in the Allium genus of plant (the family containing Onions and Garlic). She is also unable to digest anything other than raw meat (meaning she requires a special menu and seperation from any vegitarian members of staff at meal times) and her eye pigment has changed from its natural brown to a crimson red, a trait common in vampires. Much like Ms. Samuels, Ms. Lewis is self-professedly terrified of losing control of her condition and hurting others, a fact she outwardly hides in a fairly convincing manner by being cheerful and friendly to anyone she meets (a fact that has made her pretty much universally adored in the facility).
Relationships:
Azaria Thomas: Ms. Lewis and Ms. Thomas have quite a strong relationship since Ms. Lewis joined the Unit. Ms. Thomas took it upon herself to train Ms. Lewis, who had pratically no combat experiance coming into the organisation, and the half-demon has become somewhat protective of the young vampire.
Gabriel L’Angelo: Ms. Lewis seems to be one of the few people amongst the SRC that Mr. L’Angelo doesn’t have a problem with and she has apparently managed to garner a certain amount of symmpathy from him concerning her condition. On her end, she does appear quite fascinated by the “angel” (especially his wings) and he is obviously very pleased to have such attention.
Alex Finch: Ms. Lewis is one of the few members of the SRC who has any time for Mr. Finch’s attitude and demenor and seems to be the best at getting him to take his role seriously (though she will not confirm whether or not she uses her psychic abilities to do so).
Tracy Samuels: Considering the simularity in their conditions and their shared fear of losing themselves to “the beast within”, Ms. Lewis and Ms. Samuels have increadible empathy for each other. Ms. Lewis looks up to Ms. Samuels as a role model on how to overcome a supernatural affliction.