Thanks for the kind words, Vec and Tiberius!

I think these are the last ones I have for this concept, the Sato parents! 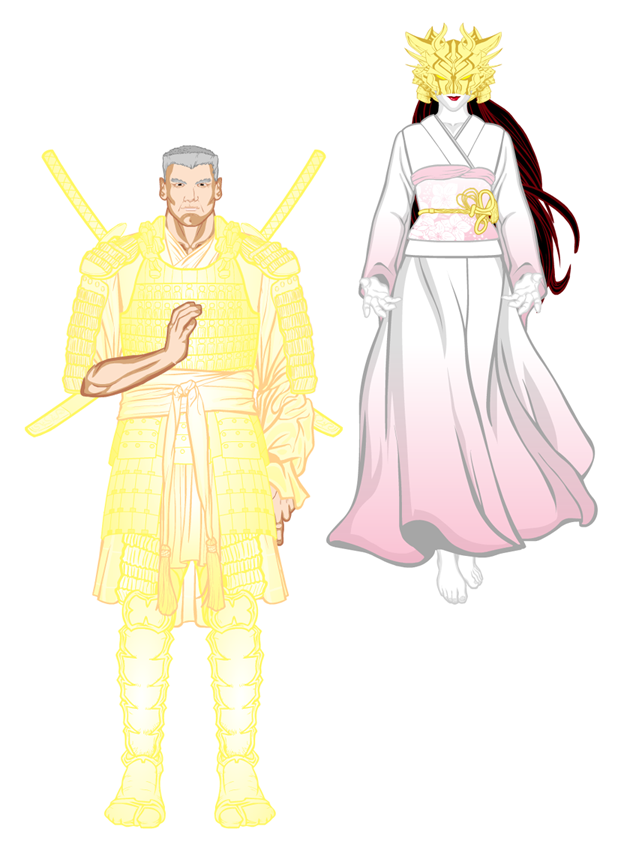 SHINING SAMURAI – Hideyoshi Sato – An incredibly accomplished superhero, empowered by a brilliant set of mystic armor and twin katanas. Together with Solarion, Hideyoshi was a founding member of the Honor Guard and a constant in its revolving roster. On one particular mission the Honor Guard came into contact with an insane archaeologist in possession of an incredibly powerful mystic artifact. When the artifact shattered the team found themselves scattered across the dimensions. Hideyoshi was stuck in a celestial plane, inhabited by the Kami of Japanese legend. There he met… her. She never gave him her name, but he was instantly in love with her. Solarion, with help from Tonantzin and other mystic consultants, found a way to retrieve his scattered teammates. For him, only a few days had passed, but for Hideyoshi, it had been years. When Solarion came to retrieve him, Hideyoshi was infused with mystic energy, far more powerful than he once was, and had three children with him: Ichiko, Megumi, and Hideki. The Kami urged Hideyoshi to take their children back to the mortal plane. She wanted them to experience the joys of the human experience: love, family, kindness. Leaving her hardened Hideyoshi’s heart, so despite having his children with him, he became distant and cold. Ichiko largely helped raise her siblings and grew up far too fast, as a way to cope with Hideyoshi’s long absences adventuring. His relationship with the three siblings remains somewhat strained.

KAMI – Unnamed – A celestial being who fell in love with a wayward human, Hideyoshi Sato. Together they had three children and raised them partly in her home dimension, before she took the opportunity to deliver them back to the mortal realm. She is a being of incalculable power, ageless, beautiful beyond compare. With most mortal interactions she wears a mask to hide her true radiance. Hideyoshi remains the only mortal to see her true form. She is able to visit her children only once a year, individually, on the day of their birth, in an astral form. She has never missed one of their birthdays.