Ha! Pretty accurate. I tend to get carried away with backstory and then pare down.

Continuing this little extended family concept. We have Megumi’s siblings! And her siblings have partners of her own so that means… in-laws! 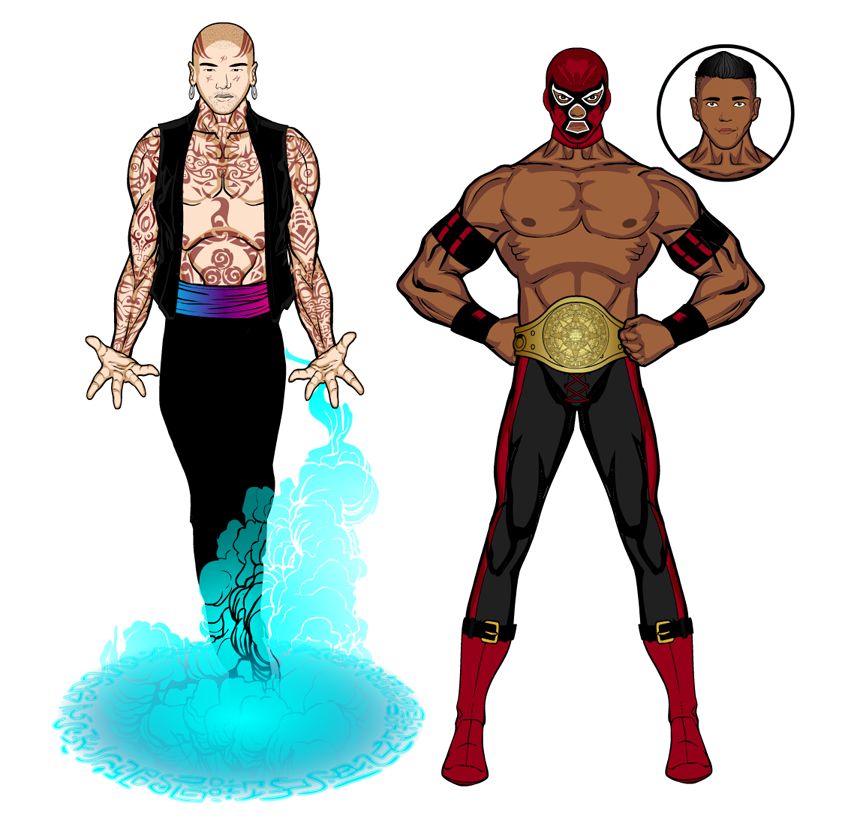 THRESHOLD – Hideki Sato-Gonzalez: Megumi’s younger brother and the son of Hideyoshi Sato and an unnamed female Kami. His mother gifted each of her children with a mystic ability having to do with one of her many aspects. Hideki was born as the Master of Barriers. Hideki’s can cross over any barrier unhindered, be it a locked door, a physical object, a mystical shield, etc. He is even able to move through planes of existence. Hideki has also apprenticed in more traditional forms of magic, becoming a skilled practitioner. The sigils he has tattooed all over his body hold various spells of protection and defense, allowing him to withstand assault from even the strongest magicks. Hideki is married to Campeón Gonzalez, a fellow 2nd-generation superhero.

CAMPEÓN – Campeón Sato-Gonzalez: He is the son of legendary Mexican superhero: CUAHTEMOC, a fearless luchador with insane strength. Campeón’s mother is TONANTZIN, a Mejica priestess and a natural mystic. . From his father Campeón inherited high-level superhuman strength and durability, as well as extensive training in combat. He is married to Hideki Sato, a passing family acquaintance in childhood, turned trusted mystic consultant early in his superhero career, turned love of his life. Campeón values his family greatly. He always tries to alleviate tensions between his parents and younger siblings, and is a doting uncle to both Claire and Gabriel.