During WWII, Professor Irwin T Schneider was able to examine the wings of U.S.Eagle and Kittyhawk on behalf of the US Military. From the notes he took, he set to work trying to replicate the devices with little success. With the end of the war the project was shelved by the military due to its high cost to low result ratio. Professor Schneider managed to smuggle a copy of his notes and an early prototype out of the project before it was shut down and continued to work on the device. By late 1949 he had developed a working set of wings – albeit much inferior to those they were based on which he offered to the military. As Kittyhawk had recently come out of retirement and rejoined the Guardians of Democracy as Ladyhawk, and due to the inferior speed, maneuverability, and range of the professor’s wings he was turned down.

Unfortunately, Soviet agents seeking methods of enhancing their own Ultras heard of the wings and sought the professor out. the patriotic professor refused to help the agent that confronted him and was warned that the consequences would be dire. Faring reprisals the professor created a mockup set of non-functional wings and secretly sent the true wings to his nephew James Jones, an amateur pilot and college student with a note to protect the wings at all costs, outlining his fears that the soviets would try to steal them.

When the soviet agent returned with backup, the professor attempted to destroy the fake wings. The soviets shot him, took the fake wings and rigged the lab to explode – seemingly one of the professor’s experiments gone awry. When James learned of his uncle’s untimely demise he knew what had really happened and determined to avenge his uncle. Creating a costume, James donned the wings vowing to avenge his uncle. Thus Patriot Hawk, scourge of the skies was born. 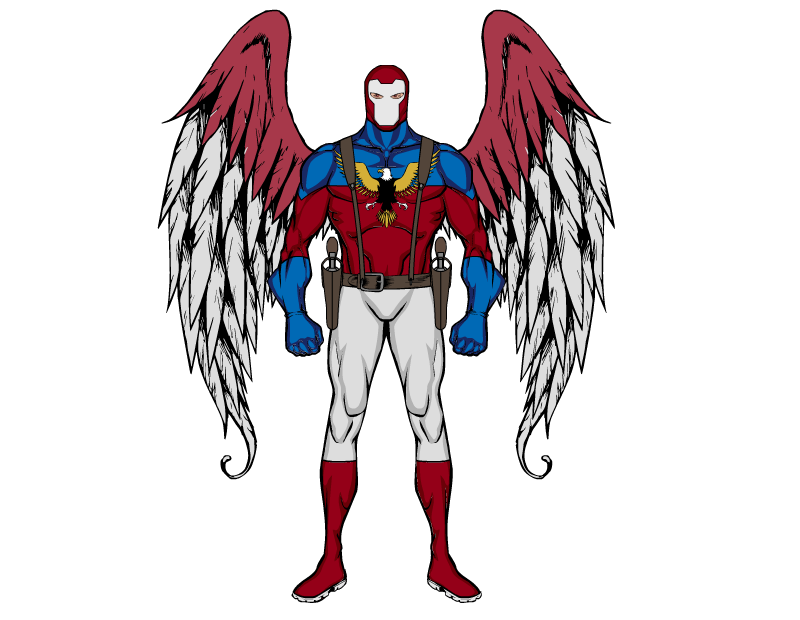 Patriot Hawk mostly operated in and around Washington DC and was never as well known as the members of the Guardians of Democracy. He primarily used twin Colt 1911A automatic pistols as weapons but was also known to use knives and even a baseball bat to dispatch his enemies. Unlike most heroes he was willing to kill if it the situation required it.