Ok, so turns out I really over-reached myself with this one. So, originally I was going to have Pulp Noir in a three-quarter turned pose, facing away from the viewer, but that went out of the window after about two weeks of trying to get the pose to look right. Then I tried a easier, side on pose, which looked alright, but then I had no idea what pose to put Bright Idea in. A further week later I think of a pose and after another week decide I have no idea how to get it to look good. Then I procrastinate and leave the pic half done. Then, after a message from Linea on deviantart I think “Ok, even if I can’t figure out Bright Idea’s pose in the pic, I promised Myro I’d do Pulp Noir, so lets at least get him done”. Then I watch the last ever Top Gear. Yeah, I procrastinate too much. But, even though it took 2 hours worth of touching up, I’ve got my take on Pulp Noir done.

Here you go Myro, sorry it took so long and that I didn’t do some silly scenario between Bright Idea and Pulp Noir, but I highly doubt I would have finished it otherwise. 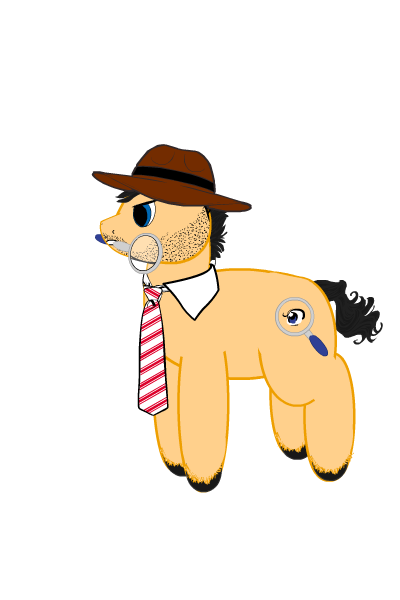 (The original idea was to either have Idea wearing Noir’s hat with his magnifying glass, and have Noir looking less than pleased, but as I said the pose didn’t work, so that’s why he looks a tad grumpy).

Anyway, I think that’ll be the last pony thing for a bit. I want to do some more normal HM fare for a bit, to try and get my mojo back.