Well, I have a special one for you today. I’ve redesigned two of my all-time favorite characters in one picture and I’m adding them to the Pax Terra universe, the Pelican and the Dark Queen. 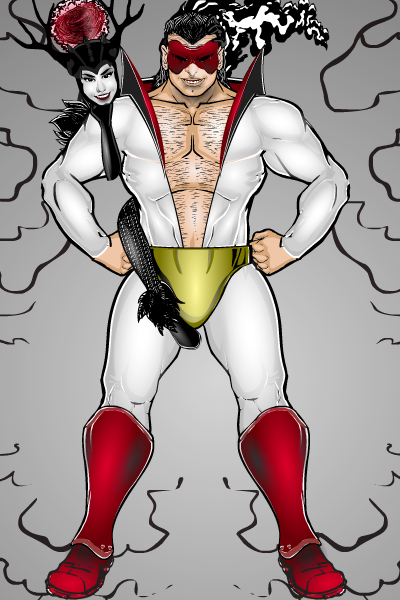 BIO:
The Pelican is one of five that touched a special meteorite decades ago and received the power of super-intelligence. With that intelligence, he turned his attention to alchemy where he created the Philosopher’s Stone. Unlike the legend, it didn’t provide long life or great riches; instead, it opened pathways to alternate realities. He also discovered by accident that the Stone could be used to drain the life energy from his alternate counterpart and transfer it to himself, giving him extra strength and speed, tougher skin, and longer life. He did this many more times and become one of the most powerful beings on the planet. Some time after he became the Pelican and was in operation for a long time.

At one point, he retired and disappeared from public life for a decade or so. During the Fae War, he came back to stop Black Swan. He was the only male that Black Swan set her sights on that didn’t succumb to her magic. The Pelican had not been known to be resistant to magic, but he had found a new power while he was away. His retirement had come as a result of losing to a new villain that only he knew of, the Dark Queen; in fact, she had taken control of him to a certain extent. She used him to create a criminal network under the identity Black Dragon.

Dark Queen’s power over Pelican is a result of his dark secret of killing his alternate selves. So, what’s her story? Well, that’s for another time…