Ooooooooooookay. Almost a month without posting something new. Been way too busy.

Anyway, once again I haven’t got the promised Idea/ Pulp Noir pic done and I only did this to try and get myself back into ‘machining again and considering the pose is reused, it was pretty simple to do. I was originally gonna hold this until after the Pulp pic so I could make a joke reference that no-one would get until I posted it, but I haven’t posted on this thread in ages and I’ve no idea when the other pic is gonna be finished so…. god I ramble a lot don’t I? So anyways, new OC time. 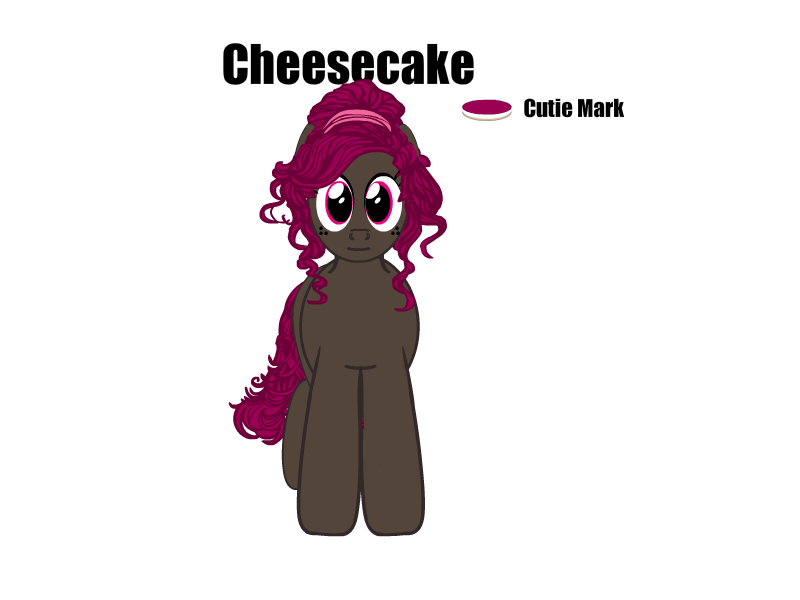 Meet Cheesecake. She’s an Earth Pony who lives in Canterlot with her room mate (and possible mare-friend, I haven’t decided yet) Bright Idea. As you can probably tell by her name her special talent and profession is baking and general desert making, which suits Bright Idea just fine, as she’s the one who tries out CC’s new recipes. She has a much calmer disposition than her rather scatty friend and is usually the one to freak out last in a crisis, which is probably for the best considering the shenanigans Idea can get into. She learnt how to bake from her aunt and uncle from Ponyville and often swaps recipes with their store assistant.

So, just one thing quickly before I go. 1: I’m not too sure about the cutie mark, do you guys think I should change it/ edit it, if so how?