After Alexiares killed his father and merged with Zagreus Princess Euthenia received a vision from the Goddess Eris where she saw what her brother had done, unable to bring herself around to what had happened Euthenia  ask the Goddess for guidance and help but it was not good news that she received Eris told her that nothing can stop Zagreus now he has passed through into this world and that soon chaos and destruction will consume the kingdom, but Eris told the princess that there was hope in he form of the Royal family, she explained that Gods & Goddess can merge with people with royal blood of Azzaro and that her only option was for Euthenia & Lorelei to merge with the goddesses’.

In wake of what had happened princess Euthenia who was now the uncrowned Queen of Azzaro knew that she needed to take on her brother herself as she had trained her whole life and her sister hadn’t so she took the hard decision to abdicate from the crown leaving the title to her little sister. Once Euthenia had addressed the people of Azzaro that Lorelei would be queen so that she could go and kill her brother, they both went to the temple of Azzaro and preformed the ritual needed to merge with the gods. Lorelei will merge with the Goddess  Aglaea and Euthenia will merge with the Goddess Eris but after the ritual was complete only Lorelei had fully merged Euthenia was still the same this was because chaos was still in her mind and Eris could not get through but she did receive another vision form Eris of Alexiares destroying the city Xenophon where there uncle and two cousins lived.

Euthenia left straight away leaving her sister to rule as queen, she put on her disguise & started to make the journey to Xenophon knowing she is no where near strong enough to take on her brother hoping that she can clear the chaos in her mind so Eris can pass through in time to save Xenophon and her family.

Lorelei was crowned Queen the day after Euthenia left for Xenophon this was the only coronation in history to have none of the royal family there beside the queen/king. 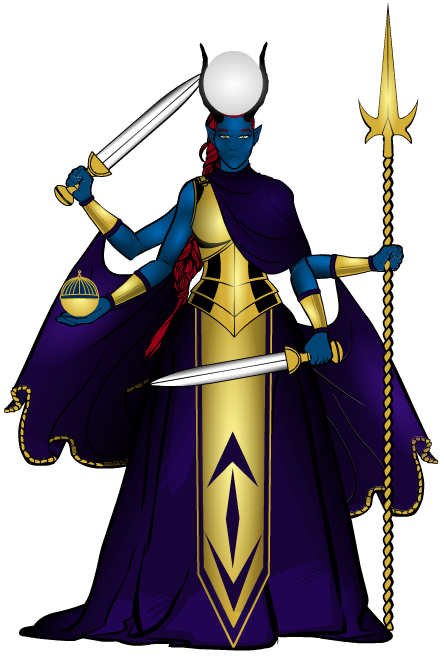