Anyway, last one for the moment. 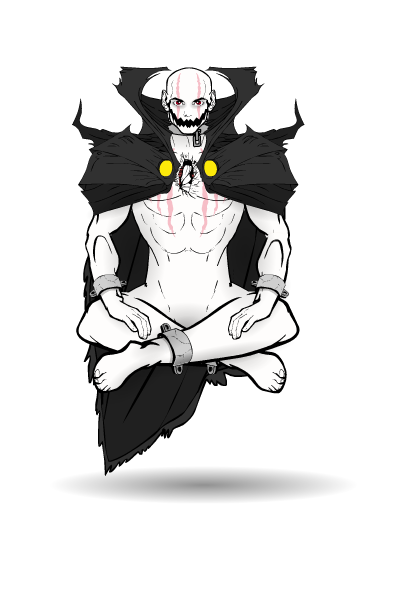 Notes: The “Death Mage” Soul Wielder, who one century ago tried to conquer the lands of Valara and Jutura. Defeated and captured by the Soul Wielders of both nations. However, there was a problem. Silence was too powerful to be allowed the opportunity to live, but he had taken measures to prevent his own death. Using an ancient magic, more commonly used to animate inanimate objects, he had bound his life force to a gem (gems being the most magical of all inanimate objects), creating what is known as a Heartcore, and hidden it. So instead Silence was sealed away, with precautions taken to prevent his escape (see further notes). However, Silence was cunning. Through sheer will, he split his magic to create himself an army, The Faceless, and sent them to retrieve his Heartcore, but it was lost in the chaos of his final battle. Now he uses the war between Valara and Jutura (a war which he had his Faceless instigate) as cover for his search, whilst he has also turned his eyes upon the Valaran Soul Wielder Corps search for the ancient magic; The Truth, a spell that would lead him directly to his lost soul, and free him from his imprisonment. He strategically placed an agent within Gade Heinriechs Truth Corps, and now all he must do is wait.

Further Notes: Silence was named because his magic left only silence behind. However, as magic cannot be cast without the incantation, his captors decided to remove his mouth and vocal cords, as a way of preventing him from ever casting a spell again.

Further Notes 2: The creation of a Heartcore is the most draining magic that can be performed and the caster must keep the gem close to retain their physical strength. The gem would not be in any danger if the caster was injured, as magically enchanted gems are incredibly hard to damage, even by the toughest of magics, but the toll on the caster is harsh. The scar in the centre of Silence’s chest comes from where he once wore his Heartcore. When the caster and core are separated for an extended period of time, the caster will wither, but not die. They will be kept alive without the need to eat, drink or even breath, as they cannot die whilst the Heartcore is intact.