@Stulte- Thanks. It’s basically like Jeimuzu said on the last page, just messing about with the speech bubble tails in backgrounds- wordballoons.

Anyway, I apologise if the next one isn’t as great. I’ve been struggling to get it to work for a while now, not been very inspired recently. Anyway, I needed something to take my mind of some IRL things today (reasons why there’s no Doctor Who review up today, I missed the episode so I’ll watch it tomorrow), so I just finished it up. I’m not overly happy with it, but if I don’t just stop with it, it’s gonna sit there and never get finished and I won’t be able to move on to anything else because I haven’t finished it. 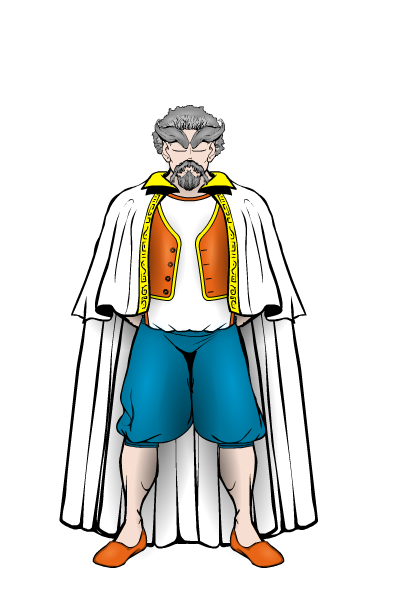 Kenjin Choten is the current master of the Honotamashi Magic House and one of the 6 members of the Council of Magic. Made up of the 6 heads of the oldest Magic Houses (Honotamashi, Honoidaisa, Honokoa, Honoriyu, Honomeiyo and Honohakken), the Council preserves the peace and laws of the magical world. Though there are many more Magic Houses, the 6 that make up the council are the oldest, most well-known and the greatest, and their masters are universally regarded as the strongest wizards of their generation. Master Kenjin is a practitioner of a branch of magic known as Support Magic, which is an uncommon and surprisingly difficult magic to learn. Support Magic allows the user to boost or weaken the magic of the target, making it a useful magic in combat, though it does leave the user vulnerable. However, the more advanced Support Magic can also be used to copy magic from other wizards, allowing the user to turn their enemies magic against them. Whilst this branch of magic is Master Kenjin’s main focus, it is not the only magic he is knowledgable about, or capable of using. Over his many years, he has learnt a wide variety of spells and forms of casting so that, despite his age, only a fool would doubt his place as Master of the House of Spirit.