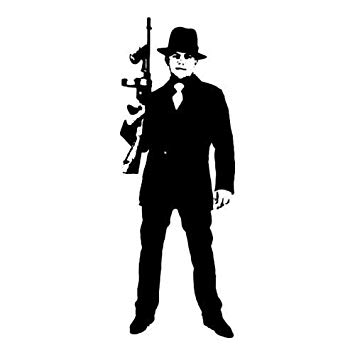 This week we move onto a unpredictable member of the villain squad  - Baby Face Muldoon.

Orphaned as an infant on his home planet – Doon Mul – Saun Fre was raised by loving human parents on earth. His adoptive father, whom he adored, instilled his love of classic earth gangster movies in his young charge. After the death of his father in a freak accident, Saun took on the responsibility of supporting his adoptive mother in her grief. He soon learned that crime does in fact pay after hooking up with a gang of intergalactic pirates who wandered earth’s upper atmosphere robbing unsuspecting travellers. His life changed the day they quite by accident attacked Invidia’s ship. She quickly dispatched his associates, but spared Saun’s life. She was intrigued by the hideous little being dressed like James Cagney with an attitude to match. It was Invidia who gifted him “Tommy” – a laser weapon shaped just like a classic tommy gun that he cherishes.

This contest will close at 6pm Eastern on Monday, February 24th.