Godzilla: King of the Monsters Review!

Posted on June 5, 2019 by melmo44 | Comments Off on Godzilla: King of the Monsters Review! 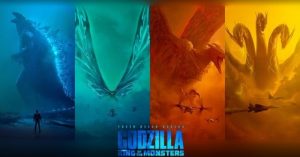 Hey everyone, just here to give you all some quick thoughts on the Godzilla: King of the Monsters! Possibly mildest of spoilers ahead with one point, but otherwise spoiler-free!

-They used the song! If you don’t know what song I mean, I mean the Bear McCreary/Serj Tankian cover of Blue Oyster Cult’s ‘Godzilla’. It’s pretty darn cool.

-All the kaiju has awesome designs and more monster action. Godzilla isn’t much changed from the 2014 version, but the new kaiju are all here for the first time and they look awesome. King Ghidorah is very dragon-y. Rodan is not so much a fossil-record-accurate pteranodon, but a realistic-looking version of his original design. Mothra is absolutely beautiful. And anyone who felt there wasn’t enough kaiju-on-kaiju action in 2014 should definitely get their fix this time around.

-Neat new kaijus! This is the ‘spoilery’ thing. There are other kaiju apart from the Big Four they’ve been hyping up. And there are some super neat designs for them, too! There’s one that looks like another Toho kaiju but has a different name, there’s the one I like that looks somewhat like an Ice Age animal, and some others that we haven’t even seen yet. There are also two for sure with the names of real world cryptids, which is think is great to incorporate into this Monster-verse. Let’s bring in more cryptids!

-Humans were more interesting this time. I really didn’t mind the humans in the 2014 film, and the ones in Kong: Skull Island were great on their own. But there’s more to the human side of the story this time than ‘a soldier trying to get home’. You spend more time with the organization Monarch as part of it, so building on that part of the world as well.

-Mothra’s music. Mothra in general. Everything about Mothra. She was beautiful, her music was this heavenly chorus. I loved Mothra.

-Use of the original Godzilla theme at a ‘holy shit’ moment. Like THE original theme. As soon as it started I was like ‘oh yes, this is gonna be good!”

-Each Ghidorah head has its own personality. The heads snapped at one another and were obviously independent. To be honest, all of the kaiju had personality. In the 2014 movie Godzilla was a force of nature. He had his moments, but he didn’t have as much expression or personality as he does here. The kaiju overall seem to be shown more as animals with animal behavior than ‘monsters’. Which I like a lot. I’d rather have more to them, something to connect with rather than a plot device to run from when it starts knocking down buildings.

-Lots of callbacks and nods to earlier films. From names to things to stuff that happens. If you’re a Godzilla fan and have seen even a few of the other movies stretching back over the last half-century, you’ll get at least some of the references.

-Don’t necessarily have to have seen Kong: Skull Island, but it would help.  I would say as long as you know who Godzilla is, even 2014 isn’t necessary, but it helps. There’s enough explanation to get you through, but you really should see the others.

-Doesn’t try to be super funny, but there is a little bit to keep it from getting too heavy. It’s not Marvel funny, but it’s not all doom and gloom.

-The villains have an interesting reason for what they’re doing rather than just to be evil. They’re trying to drive home a point we’ve seen in other recent films, but like in those ones, their methods leave something to be desired. As much fun as a good old fashioned ‘good vs. evil’ is, with something like this I think the nuance was needed.

-Keeps the same on-the-ground perspective from 2014. It can get a big hard to take in, similar to how 2014 or Cloverfield is in those close moments, but there’s still lots of wide shots to get a better look.

-Shows in news clips and articles and through dialogue the impact of living in a world post-Godzilla and how it’s affected how things are. Marvel has done that in little bits and pieces and I wish both of them would really dive into that. Although this movie, there are at least some character motivations and things that happen that are the direct result of what happened in the 2014 film.

-They kept the same origin for King Ghidorah. And Rodan. If you don’t know what those are I won’t spoil it for you, but I like that they didn’t change them. Alas, no fairies for Mothra. They did keep the whole Hollow Earth thing going, though, and I’m a sucker for old school sci-fi stuff.

- Stay for the credits & post credits. Don’t we all do this anyway?

So yeah, those are more or less the things I wanted to talk about with Godzilla: King of the Monsters. This is one of those ones that I wish was doing better, and honestly shake my head at some of the reactions. Last one was not enough Godzilla, some are saying this is too much. So what is the perfect amount of Godzilla? Have any of these people actually seen a Godzilla movie? Or maybe it got caught in one of those storms of circumstance in the box office/movie release schedule. Who knows. All I know is that I liked it, and I recommend it.

This entry was posted in Movies and TV and tagged 2019, geek, Godzilla, movie review, movies, reviews. Bookmark the permalink.